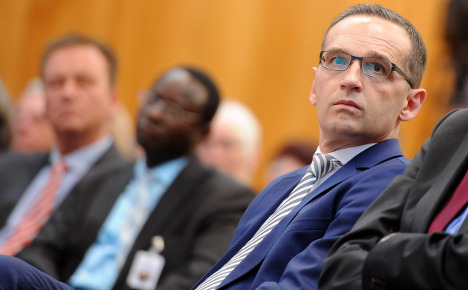 Maas said in an interview published on Monday in Bild that he would create laws to more severely punish financial backers of terrorist groups, as well as radical Islamists travelling to conflict zones.

"We must make Germany more secure," he said.

The plan is in response to a UN Security Council resolution in September that called for stricter controls of suspected extremists to prevent the growth of groups like Isis.

One suggestion supported by many European leaders and discussed at a meeting of European interior ministers on Sunday is a Europe-wide system for sharing air passenger information.

Germany banned Isis and activities like flying Isis flags, wearing Isis symbols, donating to the group, recruiting fighters and distributing its propaganda in September. More than 500 Germans are reported to have travelled to Syria and Iraq to fight with the group.

The plan also comes on the heels of the shootings in Paris that resulted in the deaths of 17 people last week and concerns about Germany's own security.

"We very much welcome measures to combat terrorist financing, punishment for travel to terrorist camps, the storage of air passenger data and the hindrance of travel by violent Islamists," said Wendt.

"(Interior Minister) Thomas de Maizière and Heiko Maas are on the right track."

But sensitive to German concerns about privacy and surveillance, Maas and de Maizière ruled out a reintroduction of a law to force internet service providers to keep their customers' browsing history in case of a government investigation.

That wasn't enough for online rights activists at the Chaos Computer Club, the Humanist Union, the Republican Lawyers' Club and the Digital Society Club, who published a joint statement on Saturday.

"Emotions can't decide the debate and the policy", they wrote.

"Whoever now tries to exploit the shock of the murderous attack politically and pull 'anti-terror laws' out of the drawer will be hoping for support from the media and society.

"But this is the wrong way, to react with laws that dangle more 'security' but in the end just restrict freedom itself."