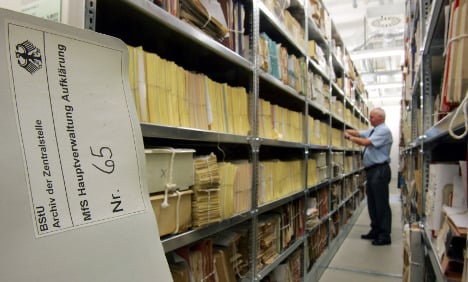 Archivists want to offer visitors to its online media centre an insight into the daily workings of the Communist state's internal spies.

One item included in the release is a one-and-a-half hour lecture from former German Democratic Republic (GDR) State Security Minister Erich Mielke, in which he explains how East German citizens wanting to travel abroad should be handled.

There are also flyers from rock musician Udo Lindenberg's famous 1983 concert in the East Berlin Palace of the Republic, confiscated notes written by prisoners, and an intercepted letter in which a schoolgirl discusses her thoughts about fleeing to the West.

However, the archive has not made any files about specific people accessible to the general public.

In all 2,500 pages of documents, 250 images, six hours of sound recordings and 15 hours of films are now free to view. Themes include the 'Peaceful Revolution' that toppled the GDR regime in 1989-90, the uprising of 1953, the death penalty against border oficer Manfred Smolka, executed in 1960 after returning from a defection to fetch his wife and daughter, and Lindenberg's 1983 concert.

More than 25 years after the fall of the Berlin Wall, there remains a high level of interest in the Stasi archives, which East Germans saved from destruction by occupying buildings in the hope that their oppressors could be brought to justice.

Many citizens of the GDR had their phones tapped and mail intercepted, and were even informed on by their friends and family. Thousands of ordinary people collaborated with the state surveillance as informants.

In 2014, 41,000 people applied for access to the files about themselves kept by the Stasi for the first time, while 67,763 applications were granted, the Stasi Records Office revealed on Wednesday.

The number of applications granted was an increase of around 5 percent on the 2013 figure.

Almost 7 million applications have been registered with the office since its founding.

But there are long waiting periods to access records, with some left in limbo for up to three years after submitting their application, federal commissioner for the Stasi files Roland Jahn told DPA in December.