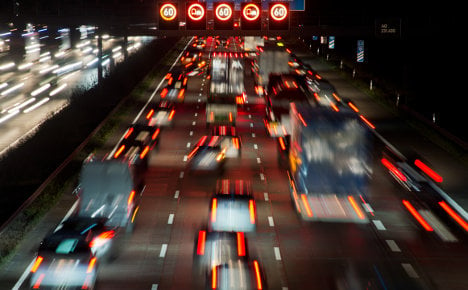 But exactly a year later, she was forced to “say clearly: it's in the coalition agreement, and it will come.”

The shape of the toll is by now familiar: all road users will buy a sticker to place on their windscreen, with German drivers receiving exactly the same amount back as a car tax rebate – so that in effect the toll only hits foreigners.

To avoid discouraging cross-border traffic from neighbouring countries, foreigners will only pay to use the Autobahn, while Germans' stickers will be checked on the motorways and on federally-owned main roads.

He said that the plans would bring in “significant revenues” of around €500m per year after deducting administration costs – and that every extra Euro would be invested back into the road system.

Social Democratic Party (SPD) politicians hastened to point out that the plans weren't out of the woods yet.

“This will be a difficult legislative process, because a lot of questions remain open”, SPD deputy leader in the Bundestag Sören Bartol said.

Government and MPs will have to find a way to implement the plan in a way that doesn't infringe on EU rules – all the more difficult now that new Transport Commissioner Violeta Bulc has expressed legal reservations about the German plans.

If the EU finds that it's unfair for Germans to be given a car tax rebate to compensate for the road toll, they could find themselves paying twice where foreigners only pay once.

“The danger still remains that everyone might have to pay the toll, German drivers too”, drivers' association ADAC warned.

Dobrindt will also have to fight an uphill battle against anti-surveillance campaigners, who object to his plans to manage the scheme with a computerized numberplate recognition system.

“The basic problem can be reduced to one question: why can't this work with a paper sticker?”

“All the objections being raised on practically a daily basis just aim to throw sand in the gears rather than to improve the law”, Seehofer said on Wednesday.

“The CDU and SPD have let themselves become the hostages of a regional party that's only worried about what people will say in the pub”, he said.