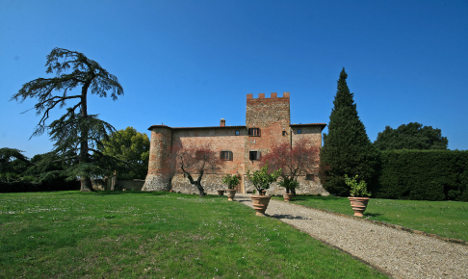 Castello di Tavolese, which belonged to the family of Farinata degli Uberti, is being sold for between €10 and €20 million. Photo: Lionard Luxury Real Estate

From north to south, 70 privately-owned castles, some of which have been in Italy’s aristocratic families for generations, are on the market.

The owners are mainly targetting foreign buyers, with about 80 percent of the interest so far coming from Russia, a spokeswoman for the Florence-based Lionard Luxury Real Estate told The Local.

The next group of keen buyers are from China, followed by Saudi Arabia and the United Arab Emirates, although the agency is yet to close any deals, she added.

Prices range from €1,200 to €8,500 per square metre, a “bargain” compared to what buyers of a similar ilk would pay for a home in London’s May Fair or near New York’s Central Park, she said.

Russia’s rich are being hard hit by a rapid decline in the value of the rouble, which dropped to a record low of 63 roubles per dollar on Monday amid a threat of new US sanctions over Russia’s annexation of Crimea.

The country is also expected to enter recession next year as the penalties and a falling oil price bite.

But this hasn't dented the fascination among Russian buyers for "a piece of Italian history and culture", the spokeswoman added.

"There is difficulty in Russia right now, but we have not experienced a correlation with the number of Russian buyers interested in Italian property."

Among the castles for sale are Castello di Tavolese in Chianti, which was built in 1200 and belonged to the family of Farinata degli Uberti, the military leader who appeared in Dante Alghieri’s Inferno.

The property, which comes with 62 hectares of parkland, a church and a number of farmhouses, is on the market for between €10 and €20 million.

Castello di Sapia, which is named after noblewoman Sapia Salvati, a main character in Dante’s Purgatory, is also being sold for €2.5 million.

But the cheapest opportunities can be found in the northern Italian region of Piedmont, where a medieval castle overlooking the Monteferrato hills is going for €7 million.