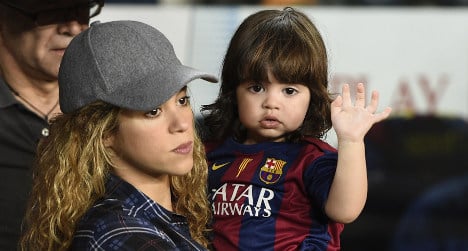 She shared the first public photograph of her first son Milan sleeping in Piqué's arms on the website of Unicef just days after he was born on January 22nd, 2013 along with a request that people donate to the UN children's agency.

The multi-Grammy-winning singer, who is expecting her second child with Pique, has shared other pictures of Milan on social media sites but in recent weeks she has declined to be photographed with her son.

"I liked being able to share with fans and the people who have always supported us the experience of being parents and the first months of my son's life," she told daily Spanish newspaper ABC.

"But now that Milan is growing and has stopped being a baby, I would prefer it if the press did not focus so much on him. I would like him to enjoy a normal childhood, as much as that is possible."

"Milan still does not realize that Gerard and I are famous, because that is all he knows. He recognizes us on television and in ads, he points and says "Mama! Papa!", but does not know that other kids do not find the image of their parents on a toy box," she said.