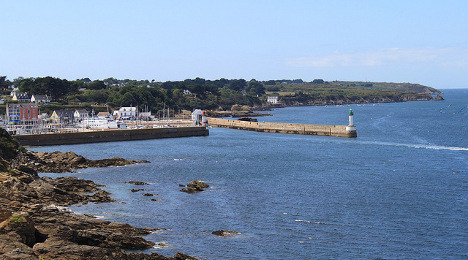 The photos were allegedly taken at a holiday camp on the island of Groix. Photo: Jeanne Menj

The four men, who include the holiday camp director as well as two temporary employees who work at a leisure centre, reportedly photographed themselves in a series of poses mimicking the shocking jihadist executions that have been posted online.

In one of around 20 photographs, one of the activity leaders pretends to be a hostage kneeling on the ground with a newspaper in his hands, flanked by masked executioners holding a knife to his throat.

The photos were allegedly taken between August 4th and 21st at the holiday camp for children aged eight to 12 in a resort on the island of Groix, which is owned by the town of Colombes in southern Brittany.

Around 45 children attended the camp, supervised by around ten entertainers.

It is not clear whether any children were present when the mock beheading took place.

On Thursday Mayor of Colombes Nicole Goueta filed an official legal complaint with a Nanterre prosecutor for glorifying terrorism.

The four were also suspended from their posts and they will also be subject to disciplinary proceedings.

“I hope that the children were absent at the time of the photos,” Goueta was quoted as saying by Le Parisien. “But these are entertainers, educators. People from Colombes entrust their children to their care. It’s unacceptable behaviour.”

The mayor said she first became aware of the photos while preparing an exhibition with photos from summer camp vacations in August at a resort owned by the town on the island of Groix.

“They gave us a USB key with these pictures in which they simulate acts of torture and barbarism. There are 18. On one of them we see a child in the corner, sitting on the ground with a terrified look. But we only see the entertainer’s foot.”

She added that it was up to police to establish the intentions of the four men.

“As for the rest, it’s up to the police and justice to decide whether these managers are open to the theories of radical Islam.”

The revelation of the photos comes as France grapples with homegrown jihadism, with several nationals seen in videos released by the Islamic State insurgent group in Iraq and Syria.

French Interior Minister Gerald Darmanin wrote on Twitter as the evacuation got under way that, this time, “1,000 officers will be deployed to prevent the camp from reforming somewhere else”.

An AFP journalist saw large numbers of police surround the rubbish-strewn camp from 7:00 am (0500 GMT) in Square Forceval in northeast Paris, with police chief Laurent Nunez on the scene.

Over the past two years, successive evacuations have moved crack users from the Stalingrad square on the city’s Saint-Martin canal, first to a nearby park, and then to their current site alongside the French capital’s ring road.

Tackling the city’s crack problem — visible on the streets for the past three decades — has proved difficult due to the addictiveness of the drug, a cocaine derivative that sells for as little as 10 euros ($9.90) per dose.

Darmanin, a law-and-order hardliner, has given newly-installed Paris police chief Nunez a single year to wipe out crack in the capital.

The interior ministry said that inhabitants of the camp wanted by police would be arrested, while foreigners without papers would be detained awaiting deportation.

“Other occupants will be directed towards accommodation structures with medical and social assistance, or to medical facilities,” the ministry added.

Aid groups say that between 300 and 400 people spend time in the camp during the day and around 150 at night, with up to 40 percent of them women.

Dealers sold crack “rocks” openly among the groups of users.

As at other sites where the addicts have gathered, local residents have complained of assaults, thefts and other disruption since their arrival.

Around 500 people demonstrated last month to mark the camp being in place for a year and demand its removal.