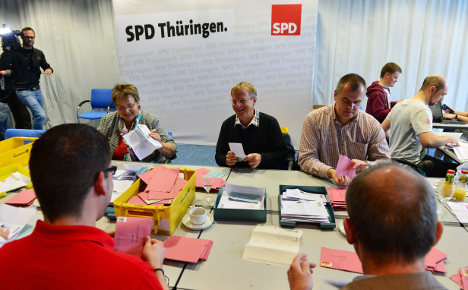 Social Democratic Party (SPD) members voted in favour in an internal poll of Germany's first so-called “red-red-green” coalition – with a state president from the Left party, with the SPD and Greens.

“This means there is clarity over the government that will be in charge in [state capital] Erfurt,” SPD general secretary Yasmin Fahimi said.

Although she accepted that some people had reservations about allowing the Linke into power, she argued that “perhaps 25 years after the fall of the Wall and in the particular case of [Left leader] Bodo Ramelow it's time to bring the Linke into governmental responsibilities.”

Commentators have filled the airwaves and newspaper columns since elections with debate over whether the SPD should enable the Linke to take power in the former East German state.

German president Joachim Gauck was sharply condemned by Die Linke this week for abandoning the traditional neutrality of his office to criticize the party.

Many mistrust the party, as some of its politicians were members of the former Socialist Unity Party (SED) which governed East Germany before reunification.

But almost 70 percent of SPD members who voted agreed to an alliance with the Linke and the Greens, SPD state leader Andreas Bausewein said on Tuesday.

“We've reached a fundamental decision,” Bausewein said. “I believe it will work out.”

“This result is a positive signal of agreement to the basic wish of all three parties to move Thuringia forward,” Linke director Matthias Höhn said.

The parties will now open negotiations over how power should be split in their future coalition. With much political haggling to come, Ramelow is unlikely to be confirmed as state president by a vote in the state parliament before December.

Die Linke came second to the Christian Democratic Union (CDU) in the mid-September vote, but with with the SPD ruling out a renewal of the two parties' previous coalition the conservatives couldn't form a government.

CDU-led governments had held power in Thuringia since the reunification of Germany in 1990.