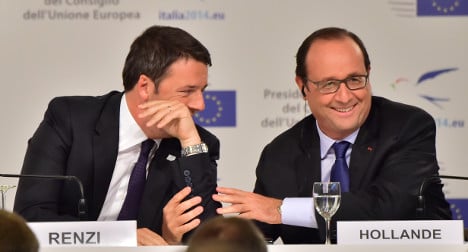 But their calls were once again batted away by German Chancellor Angela Merkel, who insisted the way out of the crisis was for all eurozone states to stick to agreed rules on the size of their deficits.

In the latest salvos in a simmering row that is set to come to head at a summit of EU leaders next week, Rome and Paris went on the offensive on the sidelines of the ASEM meeting in Milan.

"We in a very delicate moment in terms of the international economic and financial situation," Italian Prime Minister Matteo Renzi said.

"Which is all the more reason for Europe to show itself capable of producing an economic response based on investment in growth and not only on rigour and austerity," Renzi said.

He urged "a major investment in growth," saying that would be raised at a G20 meeting in Australia in mid-November of 20 major economies.

He also said a "focus on growth" was recommended by the IMF – "and they don't seem to be dangerous communists to me".

"Europe too, starting with the next European Council, could and should reflect a little more on growth because we see today that the crisis has not
been solved," Renzi said.

French President Francois Hollande said a shock slump in global stocks this week was largely down to stagnating growth in the eurozone.

"There is international uncertainty. The United States is slowing down, Europe has not found a way back to growth, which is what I am fighting about," Hollande said in a reference to his battle with Brussels over France's budget plans for the next three years.

Paris has however sought to mollify Brussels, which theoretically can order France to rewrite its budget, with plans to sell off some state assets and accelerate reform of its labour market.

Addressing the German parliament before she flew to Milan, Merkel struck an intransigient tone.

"I insist on this point: all member states must totally respect the rules," she told lawmakers in comments widely seen as being directed at France, the eurozone's second biggest economy.

"It is only in this way that (they) can… be a guarantee of stability and above all inspire confidence in the eurozone," she added.