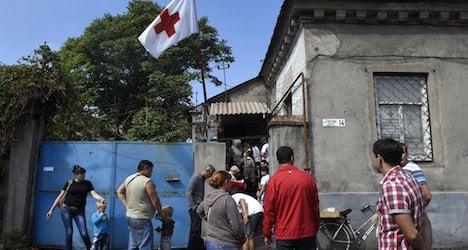 Parliament speaker Oleksandr Turchynov accused insurgents of breaking the ceasefire "over a thousand times", while the military claimed that Russian military specialists were reinforcing rebel positions.

The deadly shelling of the International Committee of the Red Cross (ICRC) office in Donetsk, which prompted a firm rebuke from UN Secretary General Ban Ki-moon, was an "act of terror", Kiev said, blaming rebels who control the city.

"This terrorist act cannot be justified," Ukraine's foreign ministry said in a statement on the death of the 38-year-old Geneva-based ICRC employee.

Kiev's military said the rebels had repeatedly fired on central Donetsk "to discredit the anti-terrorist operation."

Kiev also accused the insurgents of firing shells that hit a school bus and nearby bus station on the first day of classes in Donetsk on Wednesday, killing ten civilians.

However, Russia and the rebels both accused Ukrainian forces for the Red Cross worker's death.

"Firing from such systems is not targeted. They simply hit a general area, along with everyone in it," he said, adding that the strike most likely originated from Krasnogorovka, a town 20 kilometres west of Donetsk.

"In Kiev they didn't want to admit the obvious: the area of Donetsk that came under fire is under control of rebels and the shelling came from positions occupied by Ukrainian forces," the Russian ministry spokesman said.