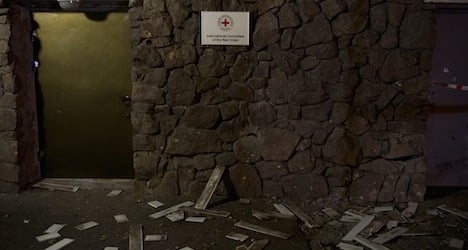 Parts of the eastern coal mining hub of Donetsk — once home to nearly a million Russian speakers but now half-abandoned — were on fire after heavy rockets slammed into a 14-story central shopping centre shortly before 6pm (3pm GMT).

AFP reporters saw another shell shatter the windows of the Donetsk headquarters of the International Committee of the Red Cross and the body of a man lying face down nearby.

A Donetsk emergencies worker told AFP that the victim was an employee of the global humanitarian organization who was based in Geneva.

Rebel websites also posted what they said were pictures of the Swiss man's passport.

It was not immediately clear who staged the attack.

But it represented a dangerous new escalation in a conflict that — despite intensified European mediation — has entered its sixth month with the death toll climbing above 3,200 and East-West relations at a post-Cold War low.

Smoke billowed Thursday over the northern half of Donetsk as resurgent rebels —  backed by what NATO claims are hundreds of elite Russian forces — also tried to stage a final push on the devastated Donetsk airport, their target since May.

"There is a huge fire burning at the airport. It is probably due to the fuel," a representative at the Donetsk separatist headquarters said as periodic rounds of machine gun fire echoed through deserted streets.

The rebel representative said gunmen had briefly entered a section of the main terminal of what was once the east's busiest air hub before they were repelled.

Nearly 70 Ukrainian troops and civilians — along with an undisclosed number of separatist gunmen who control swathes of eastern Ukraine — have been killed since Moscow and Kiev signed the 12-point peace pact on September 5th.

But the fighting has barely slowed.

The rebels continue to reject Ukrainian President Petro Poroshenko's efforts to save the ex-Soviet country from disintegration by offering autonomy to its ethnically Russian parts.

The upsurge in violence prompted German Chancellor Angela Merkel — viewed as Kiev's closest and most powerful European ally — to call Russian President Vladimir Putin and remind him of Moscow's "responsiblity" to rein in the rebels.

One of our colleagues in #Donetsk #Ukraine was killed when a shell hit close to our office. We're deeply distressed by this loss.

Ukraine's security concerns have been exacerbated by a new gas war with Russia that threatens to leave parts of the near-bankrupt country without heating through the long winter months.

Russia nearly doubled Ukraine's gas price a few weeks after the February ouster in Kiev of a Kremlin-backed president who had earlier rejected a historic EU trade and political association deal.

Kiev refused to make the extra payment and Russia's decision in June to cut Ukrainian shipments has fuelled an economic meltdown that has forced world powers to cobble together $27 billion (21 billion euros) in emergency aid.

The World Bank downgraded Ukraine's 2014 economic growth forecast to an eight-percent contraction — three percentage points lower than its previous outlook and more in line with the view taken by other institutions.

"There is no easy way out of the current crisis," regional World Bank director Qimiao Fan warned.

Ukrainian energy chiefs meanwhile travelled to Brussels ahead of what both Kiev and Moscow said would be a new round of EU-brokered talks about the energy dispute.

But talks expected to take place on Friday were postponed. A European source told AFP that now "there will not be a trilateral meeting until at least the end of the weekend."

European officials did not immediately explain the apparent last-minute delays, but they came a day after EU member Slovakia reported a 50-percent drop in its Russian gas supplies.

The former Soviet satellite nation had refused to bow to earlier Moscow pressure and continued diverting some of its Russian gas imports to Ukraine in order to ease its growing gas shortage.

Moscow accused Slovakia of violating the terms of its contract with Russia's state-held gas giant Gazprom and threatened to limit supplies to countries that assist Ukraine.

But Gazprom said on Thursday that its delivery volumes to Slovakia remained steady.

It also suggested that Bratislava was probably referring to the Russian firm's failure to meet its request for additional volumes.