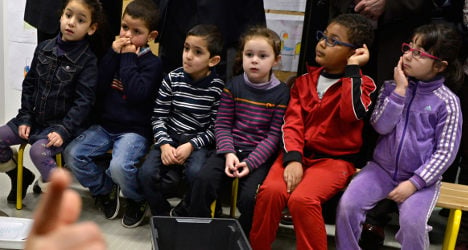 Earlier this year the alarm bells rang in France when it was revealed that the birth rate in the country had fallen below the symbolic bar of two children per women.

It appeared that a factor long considered one of France’s economic strengths, especially compared to other European countries like Germany where the fertility rate is 1.36, was on the wane.

France’s healthy birth rate – the second highest in Europe after Ireland’s – has long been attributed to pro-fertility policies such as free post-natal care, subsidized daycare, allowances for each child born (prime de naissance) and discounts on a range of services for large families.

So the alarm bells were ringing even louder this week in the aftermath of an announcement by the government that it intends to reduce key family welfare benefits in a bid to save €700 million.

Under the plans, parental leave will be cut, help in paying for childcare will be reduced for the more well-off, as will the famous "prime de naissance".

Critics have slammed the government for measures they claim will only act to dissuade couples from having children.

“Of course these measures will affect the birth rate. If the state doesn't offer help it's clear that poorer families won’t be able to afford childcare, which will put them off having children,” Thierry Vidor, from the organization Familles de France told The Local.

“This government is taking us back to the nineteenth century,” he added.

Jean-Maris Andes, president of the National Confederation of Catholic Family Associations was just as outraged.

“I do not see how these policies are coherent in a France where families are now having less than two children,” he told Le Figaro newspaper.

And François Fondard from the National Union of Family Associations said: “Young families risk losing confidence and will not fulfill their wish to have a child.”

It is not just the country’s legion of family associations who have blasted the government for its willingness to tear target family benefits.

The country’s media has been equally critical.

While many critics accept the government needs to save money some say that they are targeting the exact people they should be protecting – families.

Writing in right-leaning Le Figaro magazine economist Gaëtan de Capèle said: “Common sense would suggest we protect the family benefits (politique familiale) that are proven to work and which ease the burden… of paying for the ageing population.

“But unfortunately the government is doing exactly the opposite. The result is that having children in France will soon become a luxury,” Capèle wrote.

He was not the only member of the media to lambaste the government.

“One of the things Germany envies about France is our policy towards families,” writes Bruno Dive in Sud-Ouest newspaper.

“It is true that the French demography is a real strength, when compared to the ageing population of Germany which represents a real Achilles heel for them. The government is attacking one of the few policies that work in our country.”

In the communist newspaper Humanité Maurice Ulrich says the government has turned one of France’s principles on its head as it makes welfare cuts to fund a package of €40 billion tax breaks for businesses, called the Responsibility Pact.

The government however claims the cuts will only hit the better off families, but Thierry Vidor from Familles de France rejects this notion.

“The 'primes de naissance' are paid out depending on income, meaning it is the poorer families that receive the most, so of course they will be the ones to lose out if they are cut,” Vidor told The Local.

Critics argue that only way the government can negate a negative impact on the birth rate is by providing enough childcare places for toddlers.

The association UNAF claims there is a shortage of 350,000 places in crèches around the country.

Some demographic experts say that by undertaking the changes France is moving towards a policy more common in Nordic countries, where benefits are based more on income rather than the Gallic notion of égalité that argues everyone should receive the same, regardless of wealth.

“We can see there is a desire in France to push through a greater redistribution of family benefits in favour of the less well-off families. This trend is in line with what is done in some countries in northern Europe,” said Olivier Thévenon, from France’s National institute of Demography Studies (INED).

But critics want France to stick to its own tried and trusted model and have called for protests against the planned reforms.

A protest organized by the anti-gay marriage group Manif Pour Tous which is set to take place on Sunday, will likely see the numbers of demonstrators swelled by the government’s latest controversial reforms.

Organizers have called on "angry mums" to join their marches in Paris and Bordeaux.