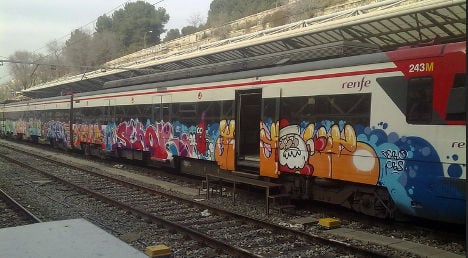 Ten people, aged between 21 and 27, were arrested on suspicion of belonging to the gang. Photo: Brocco/Flickr

The suspects, said to have daubed 168 carriages, were charged with 110 offences of public disorder and damage to property.

The group would stop trains by pulling security levers and paint up to 50 square metres (538 square feet) of carriage in just a few minutes, a police statement said.

"This action produces a sudden and violent braking of the train, generating the risk of falls and injuries to public transport users, and it disrupts the normal circulation of trains, causing delays and service cuts," the statement said.

"Three years of investigation have allowed us to dismantle this graffiti gang, one of the most active in the entire country."

Police estimate the gang caused €601,625  worth of damage to trains across the country.

The group filmed their activities and posted the videos on social media sites.