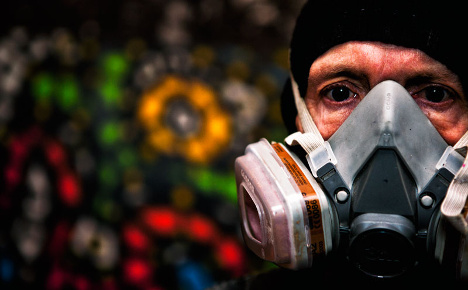 The body of the 64-year-old Walter Fischer, known as Oz, was found with serious head injuries on Thursday night on the S1 line between the central station and Berliner Tor, a Hamburg police spokeswoman said.

A can of spray paint and a rucksack were found at the scene and the paint was still wet on one of the artist's signature “OZ” tags on an electric line. Oz, originally from Heidelberg, had reputedly tagged his name, signature smiley faces and spirals more than 120,000 times around the city since 1977, causing damage running into the millions of Euros, Bild reported.

He had numerous run-ins with the law, including eight years spent in prison on a property damage conviction. The sprayer narrowly escaped returning to jail in 2012, paying a €1500 fine instead, and had been re-arrested as recently as June of this year.

But supporters say that Oz was a gifted visual artist who helped make Hamburg distinctive.

“He was the grandfather of the Hamburg [graffiti] scene,” said Martin Gegenheimer of the Berlin Youth Cultures Archive.

“He was very much an admirable contemporary artist.” His work on canvas had been displayed in several exhibitions since 2009, most recently in 2013 at the OneZeroMore gallery.

“This was really a kind of punishment for him,” gallery curator Alex Heimkind told the Hamburger Morgenpost at the time. “But he knew that he could earn money that way to pay his lawyers."