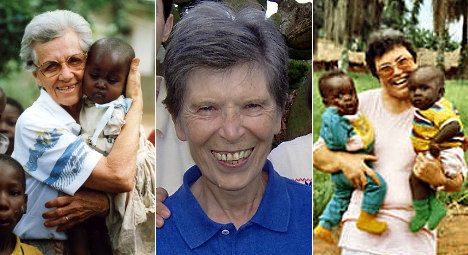 Police initially reported that two nuns were stabbed to death on Sunday afternoon. The killer then battered one of the two with a rock, before fleeing the convent.

But in the early hours of Monday morning, another nun in the same convent was killed, her body beaten and head hacked off. Colleagues named her as Bernadette Boggia, aged 79.

"After the discovery of the two nuns who were brutally killed… the decapitated body of the third nun was found," Deputy Director General of Police Godefroid Bizimana told AFP.

"The Holy Father begs the Lord to welcome into his kingdom of peace and light these three faithful and devout nuns," he said in a statement.

According to the diocese of Parma in Italy, they were killed during a botched burglary attempt.

But Burundi's police said the motive of the killing was not clear, pointing out that no money was taken.

Father Mario Pulcini, an Italian Catholic priest working in the same parish, said after the first two nuns were killed, Boggia had called him in the middle of the night reporting that she had heard a noise in the convent.

"The body of Sister Bernadette was found lying in a pool of blood, her head decapitated, and her face bore signs of beating," he told AFP in shock.

"The perpetrators had abused her, as they had violated the other two sisters earlier."

Burundian Vice-President Prosper Bazombanza said the government was "appalled by such barbarity", and promised police would do all they could to arrest the killers.

"No one can understand how a third sister was killed late at night… Burundi's government promises to shed light on this matter as quickly as possible," he added.

"Once again we are witnessing the sacrifice of people who, in total commitment, have spent their lives to relieve the suffering still on the African continent," she said.

The suspected killer in the first attack was seen fleeing the convent with a knife in his hand, said Damien Baseka, a local government administrator in Bujumbura.

Police sources suggested the third nun was killed by an accomplice who had hidden in the convent.

In 2011, a Croatian nun and an Italian charity worker were killed in an apparent botched robbery in northern Burundi.

The small nation in Africa's Great Lakes region emerged in 2006 from 13 years of brutal civil war and its political climate remains fractious ahead of presidential polls due in June 2015.

The bodies of the two Chinese women were discovered in a residential building in the upmarket Prati district on Thursday morning, while the body of the South American was found in an apartment in the same neighbourhood an hour later.

All three victims were stabbed, according to Italian media reports.

According to the Corriere della Sera newspaper, footage from surveillance cameras allowed police to identify 51-year-old Giandavide De Pau, who had been prosecuted in the past for drug trafficking and sexual assault.

The suspect is reportedly a member of a mafia clan headed by Michele Senese, who is currently serving a life sentence. De Pau is believed to have been one of Senese’s closest collaborators, acting as his personal driver and handyman.

It is unknown whether the suspected killer was carrying out a mafia hit or acting alone, possibly under the influence of drugs, which were found at the home of some family members where he is believed to have sought refuge after the police manhunt got underway, Corriere della Sera reported.

Several newspapers had warned of a possible “serial killer” in the Italian capital.

The body of one of the Chinese victims was spotted by a neighbour where it lay, naked on a landing. The woman, believed to be in her 40s, had suffered head and stomach injuries, the newspaper said.

When police entered her apartment, they found the body of the second Chinese woman.

Nobody in the building appeared to have heard the murders take place, according to residents.

“Everybody knew there was a house of ill repute here, I’d see people arriving at 2:00 am, 3:00 am,” a woman who lived in the building told reporters.

The body of the Colombian, who was 65, was found by a friend, Corriere della Sera said.