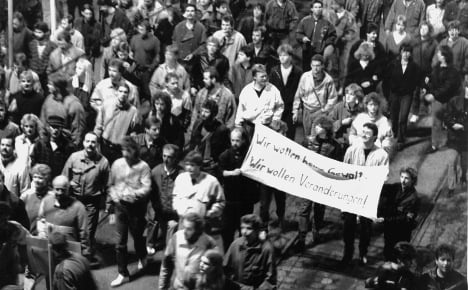 Participants in the "Monday demonstration" of October 9 1989

September 4, 1989, is a milestone in the reunification calendar thanks to demonstrators who took to the square in front of the East German (GDR) city's evangelical Nikolai Church after traditional prayers for peace.

They unrolled signs calling for “A free country with free people” and “freedom instead of mass escapes”.

Some, believing that there was no hope for political change in the GDR, chanted “we want out!” – while other young idealists responded “we're staying here!”

More and more East Germans had fled the country during the course of the year.

A group of people desperate to leave had occupied the West German permanent representation building in East Berlin in January and again in the summer. The 'Monday demonstrations' snowballed in the weeks following September 4, becoming bigger every week despite encirclement by police and members of the Stasi, the East German secret police.

Although authorities allowed the protests to go ahead on the first day due to the presence of Western journalists, they struck back hard in later weeks, arresting activists who took part and attempting violently to disperse the demonstrators.

State television painted the people from the GDR seeking sanctuary in Western embassies abroad as the hapless victims of Western propaganda who would not be able to travel any further.

Despite the violence and arrests by the police on September 18, some 8,000 people took part on September 25. By October 9 the crowd of 70,000 was too big for the security forces to do anything but stand by and watch.

Familiar slogans from the East German people's struggle for freedom developed during the demos, including “We are the people”, “Freedom and free elections”, and “Let the prisoners go”.

The demonstration on October 16 drew a crowd of 120,000 people from all over East Germany, two days before the resignation of head of state Erich Honecker and the beginning of the end of the GDR.