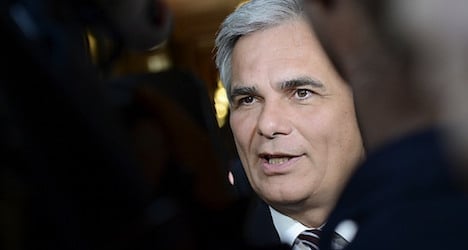 As reported by Reuters, Faymann explained that although Austria was traditionally neutral, it has drawn the line at Russia's aggressive militarism and its adventures in Ukraine and Crimea.

"You cannot say we are all for freedom but the ruble has to roll," the Social Democrat chancellor told reporters.  "If it is necessary to defend freedom and international law, then Austria will be in the forefront."

Russian President Vladimir Putin visited Austria earlier in the year, in support of the deal between Austria's ÖMV and Russia's Gazprom over the building of a branch of the South Stream gas pipeline that would effectively bypass Ukraine, offering cheap energy to Central Europe.

Faymann told Austrian state broadcaster ORF that Moscow's explanations of how Russian troops and tanks had entered Ukraine were "getting more and more obviously provocative. Nobody can believe this, so it is fitting to have a clear political message here."

He emphasized he opposed the use of force against Russia, saying rather that the EU should sharpen sanctions, although the specifics were not yet clear.

When asked about potential sanctions on gas supplies, he said:

"They are an issue but you have to know that gas supplies also have a massive effect on Europe's economy. The priority for me is political dialogue, negotiations, exerting pressure, and perhaps not delivering any more weapons."