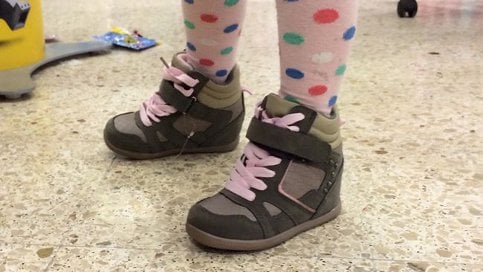 The shoes pictured are indeed the shoes in question. Photo: Joakim Loamotte/TT

The media frenzy began when journalist Joakim Lamotte slammed the Coop supermarket chain for selling "shoes that might suit a catwalk, but never a playground". His comments appeared in an SVT debate article on Monday.

By Tuesday, the shoes were recalled, with a company spokesperson saying the clothing was "not consistent with the chain's values – even if it is just a shoe with a higher back and not a heeled shoe".

Lamotte laughed off the explanation.

"I mean, I'm glad they took them away but that was a bad excuse. How strange – they said they didn't know about the high heels. Of course they knew about them," he told The Local.

The shoes, designed to be worn by toddlers, are similar to tennis shoes but have a wedge under the heel.

"When I see my three-year-old daughter hobble around in high-heeled shoes in Coop's children's section, something bursts in me," Lamotte had lamented online.

"It's completely sick that a company like Coop would sell these shoes to three-year-old girls," Lamotte wrote, fuming that little girls were given "restricting" clothing like heels and tight jeans while little boys could wear clothing more suitable for play.

Following the article, criticism of the shoes spread quickly on social media, and by Tuesday so many customers had contacted Coop about the shoes that the chain decided to remove them.

As news of the move rippled abroad on Tuesday, Lamotte said that it was a shame it took a journalist to put the issue in the spotlight. "If I had called their customer service as a customer, I don't think they would have done anything," he told The Local.

"And I'm not surprised the story has been popular. Gender equality is always hot stuff in Sweden. I think that countries abroad think we're weird with our equality talk all the time, but I think it's a good thing."
He added that readers in countries like the US would probably think he was "the most stupid person in the world" but that they could learn a thing or two from the Swede.
"When it comes to equality between men and women, the Unites States of America really sucks. I mean, look at me: I'm sitting here at home on my eighth month of paternity leave and we can do that by law in Sweden. I don't think any father in the US can say the same thing," he said.
"I can only hope that a story like this going international leads to more companies learning about equality."

COOP
What do we know about the cyberattack that forced hundreds of Swedish supermarkets to close?
Url copied to clipboard!