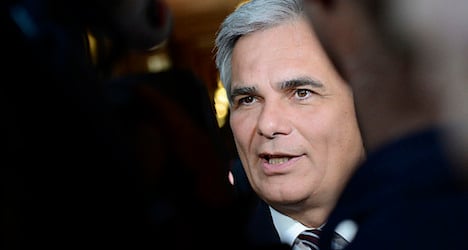 Chancellor Werner Faymann of the Social Democrats (SPÖ) says he thinks the government will remain intact, despite the resignation of his coalition partner, the head of the conservative Austrian People's Party (ÖVP) Michael Spindelegger. "I assume that the coalition will hold until 2018," he said [when the next national elections are due – ed.].

Faymann spoke to journalists after the weekly cabinet meeting on Tuesday, saying he was "surprised" by the decision. However, he had noticed that Spindelegger was often burdened by the difficult tasks he faced. Spindelegger told the chancellor about his plan to resign on Tuesday morning, according to Faymann's spokeswoman.

Now it was up to the ÖVP to elect a successor, said Faymann.

Faymann added: "I would like to thank Michael Spindelegger for his cooperation in a truly difficult time." On Tuesday morning, Spindelegger resigned from all his posts, announcing he would be stepping down as vice chancellor, finance minister, and as the leader of the ÖVP. There was no immediate indication about who would succeed him.

His resignation was due to the current tax reform debate, said Spindelegger. He complained about a lack of loyalty from his party.

Spindelegger has been vice chancellor and ÖVP leader since 2011. He took over the finance ministry in December last year.

His resignation caught everyone by surprise, including his colleagues in government and parliament. The SPÖ said that they hoped a replacement would soon be found for the leader of the ÖVP.

Minister for Social Affairs Rudolf Hundstorfer, the new Minister for Infrastructure Alois Stöger and secretary of state in the finance ministry, Sonja Stessl (all SPÖ), said they were surprised at the sudden decision. They all indicated that Spindelegger made a hard decision, and hoped the ÖVP would choose a new leader soon.

President Heinz Fischer decided to postpone swearing in new SPÖ ministers – including Stöger – until the ÖVP situation was resolved. The inauguration was originally supposed to take place next week (September 1st).

Spindelegger's party members were also caught off guard. Interior Minister Johanna Mikl-Leitner said she was surprised, but the "vice chancellor's decision is to be respected." When asked about successors, she pointed out that there were ÖVP party meetings planned for Tuesday night.

Economics Minister Reinhold Mitterlehner (ÖVP) said that it was important to decide on a course of action as soon as possible, both for the future of the government and for the tax reform.

The former ÖVP leader had occupied "extremely conservative hardliner positions" on subjects like taxes and education reforms, she added.