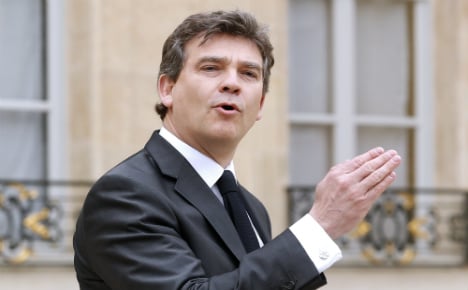 "You have to raise your voice. Germany is trapped in an austerity policy that it imposed across Europe," the Socialist minister said in an interview with Le Monde newspaper.

Montebourg's comments follow Germany's snubbing of a request from French President Francois Hollande earlier this month for an EU-wide shift of economic policy in order to encourage growth.

They put Montebourg at loggerheads with Hollande, who said this week he did not want to see France go "head to head" with Berlin.

Since the start of the eurozone debt crisis in 2010, Germany has faced accusations that by failing to use its standing as Europe's biggest economy to do more to kickstart growth, it is leaving struggling partners in the lurch.

"I hope that we can convince our European partners to make growth a priority," Hollande said at a press conference during a visit to the Comoros when asked about Montebourg's comments.

"Everyone who shares that idea is welcome, it is the position of the government."

France is mired in a stubbornly slow economic recovery and the central bank warned this month that Hollande had no hope of reaching his target of 1.0-percent growth for 2014.

"Today, unfortunately, the hawks… fight inflation when it disappears while forgetting to fight the essential problems such as widespread unemployment," he said.