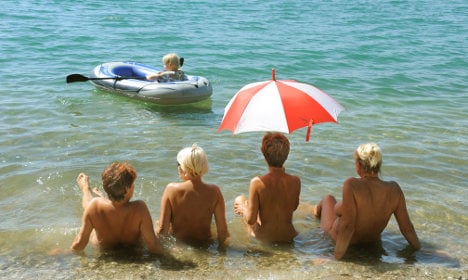 For almost a century, German sun-worshippers have been known to rip off their clothes at the first sighting of the country's all-too-rare summer rays.

Especially since the carefree 1970s, naturists, unencumbered by clothing and their parents' prudish mores, have frolicked in the buff on beaches, lakes and in city parks.
The trend was especially popular in the former communist East Germany, whose people celebrated it as a rare expression of personal liberty in an otherwise highly oppressive society.
But times are changing for the movement known in German simply as "FKK", short for Frei-Körper-Kultur or "free body culture".
"Society is changing," laments Kurt Fischer, president of the German Federation of Naturist Clubs (DFK), in an interview with AFP.
The energetic septuagenarian has been counting membership forms and says total numbers for Germany's 145 clubs have fallen two percent a year to about 40,000.

Bowling in the buff

Followers of the bronze cult are now ageing fast. The largest contingent is currently in the 50 to 60-year-old bracket, and members under 25 have become rare.
Fischer blames radical changes in people's working lives, with irregular hours making it hard to commit to FKK clubs and associations.
"Twenty years ago almost everyone had the weekends off," he said. "Now in almost all jobs, we must be flexible and free time is dictated by the employer.
"This is a problem for organizations that have their own structures and that want to bring people together for an event at a specific time."
From bowling to table tennis and even sailing holidays in Greece, the FKK clubs offer a wide range of outdoor activities and competitions.
But rival leisure opportunities have also exploded in recent decades.
"People no longer want to commit," said the DFK president. "They say 'one weekend I do this, another weekend I do that'."
Naked skateboarding?
This is especially true for younger people who are far less likely than their parents to strip off their trunks or bikinis in public, in part because they regard fashion as a crucial marker of group identity.
"Skateboarding is trendy, but skateboarding stark naked, no!" laughed Fischer.
Young people with immigrant backgrounds and from Muslim cultures, where the unclothed body remains taboo, have proven impervious to the lure of nudism.
Paradoxically, "uncommitted" naturism, such as taking a dip in a lake in one's birthday suit, is still going strong in Germany.
"It has become natural, it's part of a lifestyle where we want to reconnect with nature," said Peter Zellmann of the Vienna-based Research Centre for Leisure and Tourism.
"We no longer need to be part of an association, of a structured organization."
In Munich, the capital of the conservative and mainly Catholic southern state of Bavaria, the largest city park, the Englischer Garten, has a space reserved for naturists.
Many a foreign tourist strolling through the green space has been stunned to come face-to-face with exposed female breasts, not to mention disrobed men playing Frisbee.
The same goes for the wind-swept beaches on the Baltic and North Sea, which are strictly divided between swimwear and "fabric-free" areas.
When summer comes to Europe, between eight and 12 million Germans still engage in nudism, said French geographer Emmanuel Jaurand, author of a comparative study on the naked cult in Germany, where nudism has been legal since the 1920s, and in France where it was authorized only in 1956.
In his study, Jaurand concluded that Germany remains committed to "urban public nudity that is uninhibited and quiet" and "detached from any sexual connotation".
SEE ALSO: Munich unveils nudist bathing spots