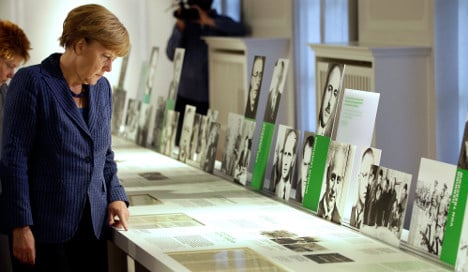 In her speech the Chancellor said a wide variety of people in Germany had resisted the Nazis and that the museum was a chance to move beyond old narratives about German resistance.

The exhibition opened to the public on Wednesday on the site of an older museum in the capital's western Tiergarten district, just weeks ahead of the 70th anniversary of the failed Stauffenberg plot to assassinate Adolf Hitler on July 20th, 1944.

In one multimedia exhibit, visitors can watch the plot's events unfold in a minute-by-minute account.

But the museum aims to show that German resistance went far beyond the military elite lead by Lieutenant Colonel Claus Schenk Graf von Stauffenberg, portrayed on screen by Tom Cruise in the 2008 Hollywood film Valkyrie.

Sections of the museum are dedicated to lesser-known attempts on Hitler's life, such as that by Johann Georg Elser, who narrowly missed Hitler with a hidden bomb when he left an event early on November 8th, 1938.

The exhibition also profiles underground resistance movements such as Berlin's Red Orchestra or the Kreisau circle, as well as better known groups such as Sophie Scholl's White Rose student movement in Munich. More generally, sections also show how resistance developed among larger groups in society such as the workers and young people.

For Germany, a nation where dealing with the past is always fraught with controversy, Berlin Mayor Klaus Wowereit said the museum represents a step forward in the tone of the debate beyond the Stauffenberg plot.

Historians have long argued over how engaged and compliant ordinary citizens were with workings of the regime, but most agree only a small minority dared to openly resist.

Many Germans simply looked the other way as the regime deported and murdered others at will.