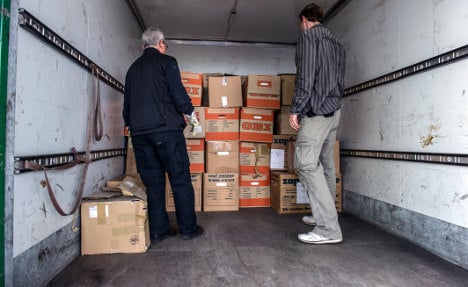 Documents recovered from the skips are taken into police custody. Photo: DPA

Tens of thousands of pages of secret planning documents and reports on Berlin's over-delayed and over-budget airport were found in two skips in Marktstraße in the eastern Berlin district of Lichtenberg, said Bild newspaper.

Some of the documents stem from the former airport architect group pg-bbi, which was taken off the job after the scale of the planning disaster became clear in 2012. The offices of former member JSK are located in the same street.

Dumped in the trash were detailed plans and reports on elevators, electric power installations and ground plans of the passenger terminal, among others, some of them dating back to 2009.

Many of them were headed with the airport's logo.

Police are now investigating how the papers got there, wrote Bild, with the papers having since been taken into police custody.

The overseeing airport body said it had been surprised by the find.

"The incident must be cleared up," spokesman Ralf Kunkel told the paper.

AIRPORT
IN PICTURES: 11 photos that tell the story of Stockholm’s Bromma Airport
Url copied to clipboard!