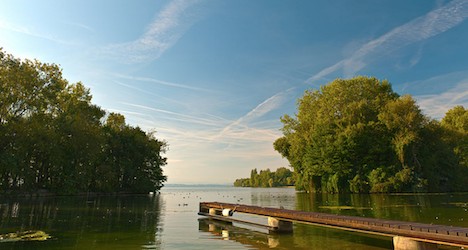 Waterfront near Colombier, where the aircraft took off. Photo: Imagepro/Wikimedia Commons

A 71-year-old and 59-year-old, both residents of the canton of Neuchâtel, died after the aircraft plunged into the water on Saturday morning around 30 minutes after taking off from Colombier, southwest of the city of Neuchâtel, Vaud cantonal police said.

A team, including a dozen police divers, managed to pull up the plane from a depth of 80 metres, using a crane on a barge, in a northeastern area of the lake three kilometres from the village Cudrefin, in the canton of Vaud, police said in a release.

Divers hooked a cable to the wreckage to allow it to be pulled to the surface, police said.

The two victims were extricated from the cabin of the aircraft.

It was the first time that Vaud police divers had achieved a mission at such depths, Olivia Cutruzzolà, a spokeswoman for the cantonal force told the ATS news agency.

Cutruzzolà noted the operation involved the cooperation of police and emergency rescue organizations from the cantons of Vaud, Fribourg, Neuchâtel and Geneva.

Sophisticated equipment including underwater robots from the Geneva and Vaud cantonal police forces were used to pinpoint the location of the plane by 7pm on Saturday, Vaud police said.

The bodies of the victims were transported to Lausanne for a forensic analysis.

The remains of the plane were taken to the Payerne aerodrome, in the canton of Vaud, where it will be examined by staff from the Swiss accident investigation service.

The cause of the accident has not yet been established.

Police issued a call for witnesses or people who may have information about what happened to phone 021 644 44 44.