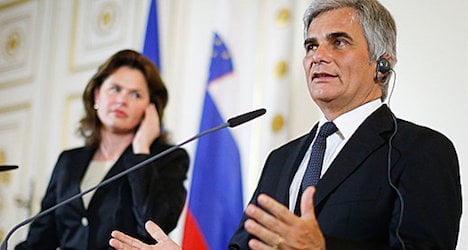 "I believe that the South Stream project is the right and possible path to ensure a mid-term energy supply sustainability", Austrian Chancellor Werner Faymann told journalists after meeting his Slovenian and Croatian counterparts at Brdo pri Kranju near Ljubljana.

He added "Austria in principle backs the South Stream project… and we believe it should be carried out for the mid- and long-term sustainable supply of natural gas."

Faymann's remarks come ahead of a visit by Russian President Vladimir Putin to Vienna next Tuesday, during which Moscow is expected to try to secure Austrian support for the Gazprom-led pipeline after Bulgaria suspended work on the project under pressure from the European Union.

Faymann discussed the fate of the South Stream project during a regular meeting with the prime ministers of Slovenia Alenka Bratusek and Croatia Zoran Milanovic on regional collaboration.

"There are still some technical issues that remain open and have to be solved with the EU," she said referring to Brussels' call on all 28 member states to stand united in resisting pressure from the Kremlin over the project.