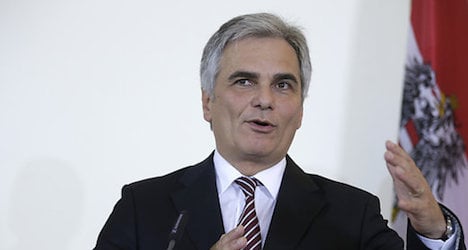 On Friday, he was due to go to Kosovo and Slovenia. He was accompanied by Defence Minister Gerald Klug.

In Belgrade, Faymann reminded listeners about the beginning of World War I, almost 100 years ago. He asserted that the consequence of the First and Second World Wars, and the Yugoslav Wars, was that there could only be a shared Europe.

According to Die Presse, Faymann said in Belgrade that "War and violence have never solved conflicts."

He met with Serbian Prime Minister Aleksander Vucic, and President Tomislav Nikolic. Vucic said that his government would do everything to make Serbia fit for the EU by 2020.

On Thursday afternoon, Faymann visited Sarajevo, and met with Bosnian head of government Vjekoslav Bevanda. Bevanda told journalists that he had thanked the Austrian chancellor for his country's support in the flood disaster. Serbia and Bosnia-Herzegovina are still struggling to recover after the disaster last month.

On Saturday, Faymann is due to join an informal meeting of Social Democrats in Paris about the future EU Commission President. He will also meet with French President Francois Hollande.