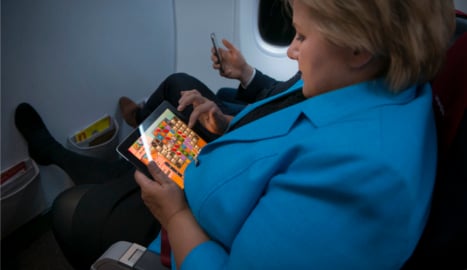 Norway PM Erna Solberg plays Candy Crush on the final day of last year's election campaign, as she flies back to vote in her home town of Bergen. Photo: Heiko Junge/Scanpix NTB
In one of a series of interviews given before the summer break, Solberg told Norway's Aftenposten newspaper that she had recently taken a break from the game after overcoming the landmark "jelly level".
"Right now, I'm a bit fed up. I reached level 300 and I haven't played for a few weeks, but it'll come back," she told the newspaper.
This means that  'Iron Erna' has found time to conquer as many as 139 levels since she won Norway's general election last September.
Solberg first revealed her enjoyment of the game in an interview with Norway's VG newspaper in the run-up to last year's election.
"It is relaxing to play Candy Crush and other relatively uncomplicated games," she told the newspaper. "In a hectic election campaign there will not be much time for it, but sometimes I take the iPad with me on a plane or in the back seat of the car."
She was later filmed playing the game as she was driven to appear on the Skavlan chat show.
Candy Crush, made by the Swedish game developer King, has remained the most popular game on Facebook ever since it surpassed Farmville 2 in March 2013.