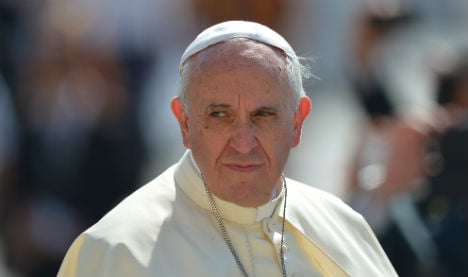 He also defended pope Pius XII, who has long been accused of remaining silent in the face of the Nazi Holocaust and the mass murder of millions of Jews.

"I don't know why everyone picks on Pius XII and the Church, but no one talks about the Allied Forces," Francis said in a wide-ranging interview published Friday in the Barcelona-based daily La Vanguardia.

"They knew the railway network which transported Jews to the concentration camps very well. They had photographs. But they did not bomb the tracks. Why?" he said.

The 77-year-old said he was confident that once the Vatican archives on World War II are made public in the next few years, their contents will "shed a lot of light" on what went on behind the scenes in the Holy See.

"We hear all sort of things said about poor Pius XII, but we must remember that he was considered a great defender of the Jews," he said.

The Italian pontiff, who reigned from 1939 to 1958, hid Jews in convents in Rome and across Italy, as well as in the papal summer residence in Castel Gandolfo, where 42 babies were born in hiding, Francis said.

"I do not want to say that Pius XII did nothing wrong. We all make mistakes, I make them too. But his role must be read in the context of the time," he said.

"To stop more Jews being killed, was it better not to speak out or should he have done so?"

Francis's predecessor Benedict XVI controversially kicked off the process to make Pius XII a saint, but it has ground to a halt because he has yet to be attributed any miracles.

Pius XII is accused by numerous historians of being overly cautious by refusing to condemn the Holocaust for fear of reprisals against Catholics in occupied Europe.