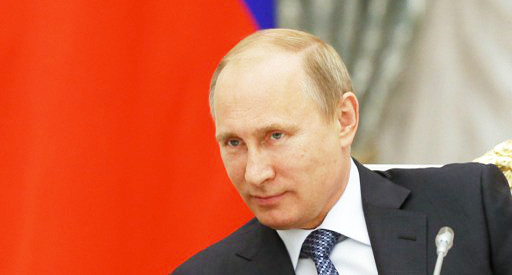 Russia's President Vladimir Putin chairs a meeting at the Kremlin in Moscow, on May 7th 2014. Photo: Dmitry Astakhov/Ria-Novosti/AFP
"President Putin has been invited by President (Francois) Hollande to take part in the ceremonies to commemorate the Normandy landings on June 6th. He has accepted the invitation. He will be coming on June 6th," Alexander Orlov told BFM television.
Hollande had previously made it clear that Putin was welcome to attend the ceremonial events.
"We may have differences with Vladimir Putin but I have not forgotten and will never forget that the Russian people gave millions of lives" during World War II, he told France 2 television.

"I told Vladimir Putin that as the representative of the Russian people, he is welcome to the ceremonies."

Western leaders including US President Barack Obama and Britain's Queen Elizabeth are also due to attend the events on June 6th to commemorate the Normandy landings that marked the beginning of the liberation of continental Europe from the Nazis in World War II.

Putin had said earlier this week he did not rule out attending the ceremonies despite the Ukraine crisis, the worst standoff between Moscow and the West since the Cold War.

In March, the United States and other top economic powers cancelled a G8 summit with Russia planned for the Black Sea resort of Sochi in June and replaced it with a G7 meeting to be held in Brussels.

The West has also imposed sanctions on Russia over its stance on Ukraine.