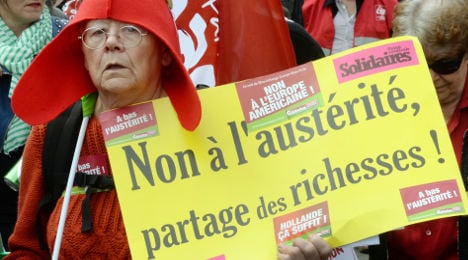 Some €50 billion cuts and freezes in benefits are not austerity, the French government says. That's a joke, say analysts. Photo: Pierre Andrieu/AFP

Despite announcing €50 billion worth of spending cuts and freezes this week the new French Prime Minister Manuel Valls has refuted any accusation that his measures can be labelled “austerity”.

“These efforts are fair because they are collective and equally shared out,” said Valls after he made his measures public on Wednesday.

"We cannot afford to live beyond our means," Valls said. Later on French television he stressed that his economic programme was “not an austerity plan”, the kind of which Europe imposed, amid much national opposition, on the likes of Greece and Spain.

The denial continued the following day when French Finance Minister Michel Sapin also rejected the use of the "A-word".

“We are not in a policy of austerity, but one that is serious and responsible,” Sapin said. “We have not cut any benefits," Sapin said. Minister of Social Affairs Marisol Touraine continued the party line: “The efforts do not consist of cutting welfare benefits, that would have been austerity”.

Despite government efforts to paint a rosy image of €50 billion worth of cuts, including freezes on state pensions and family allocations until October 2015, economists and political scientists dismissed their efforts.

“There’s no doubt this is austerity because these measures will impact on the spending power of people. As soon as fiscal measures impact negatively on spending power then that is austerity,” economist Eric Heyer, from the French Economic Observatory told The Local on Thursday.

French professor of politics Philippe Marliere also dismissed the government denials as a “joke” saying the country has been in a period of austerity “from day one” under Hollande.

“Of course it's austerity. It is a joke on the part of Manuel Valls to say it isn’t. He may call them 'savings' but in layman’s terms it's austerity.

“It might not be as drastic as Greece, but it’s still €50 billion of cuts across the board and will hit the lower and middle classes," said Marliere who teaches at London's UCL.

Criticized by the left and right

Although the austerity measures were nothing like the sweeping cuts imposed by the EU on Greece and Spain, they were attacked by the far left and increasingly popular far right, both of which share a dislike of the EU and what they see as German-backed rules governing countries that are part of the eurozone.

Florian Philippot, vice-president of the far-right National Front (FN), added: "Millions of French people are going to suffer a collapse of their living standard because the government insists on obeying the EU on the euro."

The savings and cuts are designed to allow the government to implement Hollande’s flagship “Responsibility Pact” which will cut payroll charges for companies in the hope they will recruit new staff and help cut record unemployment levels and revive the flagging economy.

However UCL’s Marliere believes Hollande could be heading for trouble, pointing out that even if payroll charges are cut there is no guarantee that companies will fulfil their side of the bargain.

“The mainstream left does not see cuts as the right answer to the situation France is in. And they see these latest measures as just helping big businesses and firms get away with paying less taxes.

“There’s no guarantee that they will create jobs, they may just use the benefits to get help them recover profits,” Marliere said.

Heyer also criticized the measures, saying they would help make savings in the short term, but what France needed were real structural reforms.

Rebellion in the ranks

The government’s vehement refusal to discuss the “A word” appears aimed at trying to quell a simmering rebellion in its ranks that could erupt and threatens to derail Valls's proposals as well as Hollande's presidency.

The announcement of the €50 billion cuts, which needs to be voted on in parliament, has angered many Socialist Party MPs, meaning it may prove tricky to get the bill approved in parliament when it goes to a vote at the end of April.

Socialist Party supporters have long been unhappy at Hollande’s economic policies, accusing him of neglecting traditional socialist ideas in favour of harsh measures they would have expected from a right-wing government.

In the aftermath of Valls's speech, lawmaker Christian Paul said he and some other Socialist deputies would be unable to support the government if the package was not amended.

"We were not elected to organize a reduction in the spending power of pensioners, civil servants and workers who depend on social benefits," the Socialist lawmaker added.

However the French Economic Obervatory’s Heyer believes the “ridiculous” world of politics means the socialists are unlikely to vote against the bill and cause the dissolution of parliament.

“We will have the ridiculous situation where the right-wing party will criticize and vote against right-wing policy and a Socialist party that will vote for it despite being against it,” Heyer said.

The measures are to be examined by the cabinet next week and presented to parliament on April 30th.