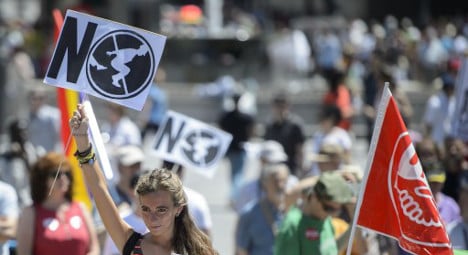 The demos have been organized by Spain's two main workers unions, UGT and CCOO, on the eve of a huge protest organized by international unions in Brussels.

Only cities in Catalonia will postpone their protests until Sunday April 6th.

All those taking part in the protests are calling for a change in policies in both Brussels and Madrid, including that both national and European authorities support the investment plans drafted by the European Trade Union Confederation (ETUC) as a means of generating more quality jobs.

ETUC is also calling on Europeans to vote for candidates during the upcoming European elections "who will change the way the EU is run" and share their vision of a "prosperous and socially inclusive Europe".

Spain's three main workers unions want 2 percent of Spain's Gross Domestic Product invested in their plans to act as a "trigger" for sectors of the economy which have been hard hit by austerity cuts.

EU ELECTIONS
European elections: What you need to know about the eurosceptics and populists
Url copied to clipboard!