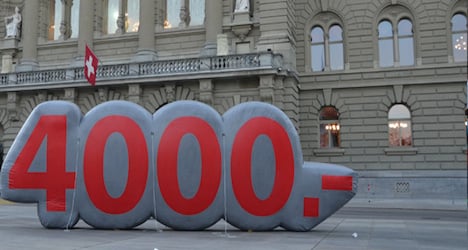 The unions say no one should receive less than 4,000 francs. Photo: SGB

The issue will come to a nationwide vote on May 18th. The government set out its position – against the minimum wage – on Tuesday.

The unions are calling for workers in Switzerland to receive a minimum of 22 francs per hour, or 4,000 francs a month.

The Trade Union Federation (SGB/USS) says 330,000 people in Switzerland work for wages of less than 22 francs an hour although one third have completed vocational training.

“They provide skilled work but don’t make a decent living,” SGB president Paul Rechsteiner said at the campaign launch, according to the Swiss news agency SDA.

If these workers had to be supported through welfare benefits this amounted to a wage subsidy from the state to employers, Rechsteiner said.

Women are most likely to be low wage earners, SGB says, with 12 percent of women affected compared with four percent of men.

The government and parliament are recommending the initiative be rejected at the ballot box.

On Tuesday Economics Minister Johann Schneider-Ammann launched the government campaign against the proposal.

"The government is convinced it would be wrong for the state to impose a nationwide wage," he told a media conference.

If the plan is approved, Switzerland's lowest hourly salary will exceed that of current record holder Australia by more than ten US dollars. Australian workers are entitled to A$16.37 per hour ($14.67).