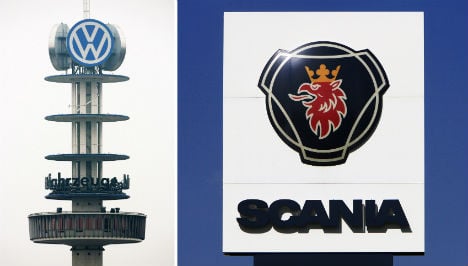 The logo of German car maker Volkswagen on the top of Hanover's TV tower and the Scania logo taken in the factory in Södertälje, 50 km south of Stockholm. AFP Photo/ John Macdougall / Sven Nackstrand

Volkswagen tabled their $9.2 billion bid to swallow up Scania on Friday. It already owns 89 percent of Scania's voting rights and 62.6 percent of the company, with VW eager to secure the nearly 40 percent they don't own.

However, the takeover has encountered resistance from two of Scania's minority owners. Both insurance outfit Skandia and pension fund AP4 have expressed reservations about selling up to Volkswagen.

“Scania’s prerequisites to maintain its leading position are better as a listed company than as a subsidiary in a larger group. Skandia doesn't intend to accept the offer," Caroline af Ugglas, head of equities at Skandia told Bloomberg.

Volkswagen is telling shareholders of the outstanding stock it is willing to pay them 200 Swedish kronor ($36.84) per share. It bought into Scania in 2000.

“This must be evaluated in light of the duty we have for our pensioners and it is not obvious that that is the stock market price plus a few percent,” said Mats A. Andersson, who heads up the AP4 pension fund to Bloomberg.

Meanwhile, the proposed deal has also encountered concern from the IF Metall trade union at Scania in Södertälje, who fear their influence would be lost if Scania is swallowed up by Volkswagen.

The deal has received some positive backing with the Swedish Shareholders' Association who said it was "positive."

“There is a lot of frustration regarding how VW has treated their minority shareholders. We think it is positive that they make this offer," Carl Rosen, head of the Swedish Shareholders’ Association is quoted as saying by Bloomberg.

Scania, which has been in operation since 1891, presently employs 38,600 employees in more than 100 countries. Its headquarters are in Södertälje, Stockholm county, where almost 10,000 of the workforce are based.