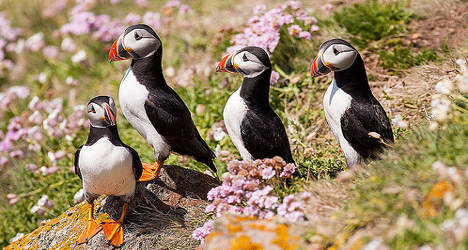 Puffins were among thousands of birds who washed ashore dead after a spate of brutal storms in France. Photo: John Finn/Flickr

The Atlantic storms that have buffeted Europe in recent days have killed at least 5,000 sea birds on the French coast, half of them puffins.

Most of the birds whose bodies have been washed up on beaches between the Pyrenees and Brittany died of exhaustion or starvation as a result of days of gale-force winds which made it impossible for them to fish, officials with the national Bird Protection League (LPO) told AFP.

"It started a fortnight ago but there has been a big increase in the numbers over this weekend," said the LPO's Olivier le Gall.

After puffins, guillemots have been the species most affected, followed by razorbills and kittiwakes.

Although most of the bird deaths were caused by the weather conditions, the LPO said there had also been some caused by pollution as a result of cargo ships taking advantage of the inclement conditions to vent noxious gases at sea.

The storms have also reeked havoc on people, prompting a seemingly ceaseless string of floods, overflowing rivers and alerts from authorities. The rough conditions knocked out power to 55,000 people in Brittany last week.

Just days prior the weather got so nasty, high seas pushed a Spanish cargo ship into a sea wall in near the south-western France town of Bayonne, breaking it in two.