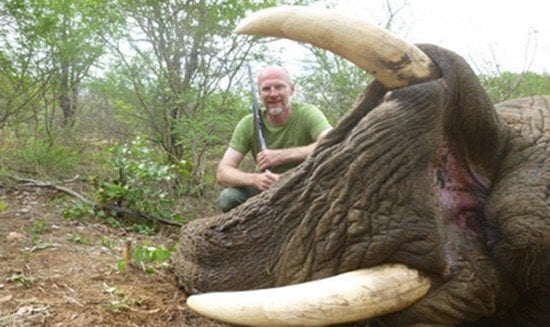 Udo Wedekind on the elephant hunt in Botswana. Photo: Private

Holiday snaps which civil servant Udo Wedekind shared with a few colleagues at the Thuringia state government caused upset among animal rights activists and politicians when they were published.

They show him standing proudly over a dead three-tonne elephant that he shot at the beginning of December 2013 – weeks before killing the animals was made illegal in the African country.

The photos came with a boastful email, describing the hunt's tough conditions and what a challenge it was.

They sparked a debate over whether it was appropriate for the head of Thuringia's environmental department – which is also responsible for species conservation – to take part in a big game hunt.

Calls for his removal from the position were loudest from the far-left Die Linke parliamentary faction.

“[There should be] no species conservation for ostentatious trophy hunters,” said faction head Bodo Ramelow in a statement released on Monday.

But this was not the end of the huntsman's career, as Rheinholz – himself a keen hunter, according to the Tagesspiegel newspaper – made Wedekind president of a different department.

Wedekind will be the head of Thuringia's Institute for Agriculture, the environmental ministry confirmed.

"This is not a promotion, more the opposite," spokesman for the ministry Andreas Maruschke told The Local. "The job [Wedekind had] as departmental head is considered more senior."

Wedekind will move from his Erfurt office – in which he reportedly had photos of himself posing with dead lions he shot – to the city of Jena.

“The departmental head has seriously damaged the image of the office,” said Ramelow.

He added that the civil servant – who had gone to Botswana using his holiday time – was boasting that he had shot the around 40-year-old elephant 20 times.

“I'd wish anyone a nice holiday, but killing animals while on it is disgusting,” Social Democrat environment politician Eleonore Mühlbauer told the Tagesspiegel.

Spokeswoman for the German branch of the WWF wildlife conservation group echoed Ramelow's sentiments. “Doing so has damaged the credibility of the ministry,” spokesman Jörg Ehlers told the Thüringer Allgemeine.

He added that not everything that was legal was legitimate. Elephant hunting was, when Wedekind fired his shots, allowed to an extent in Botswana. The country banned it at the beginning of 2014.

Thuringia's Green party branch leader Anja Siegesmund called Wedekind's December holidy a “last-minute trophy hunt” referring to the fact that must have known that organized elephant hunts were soon to be illegal.