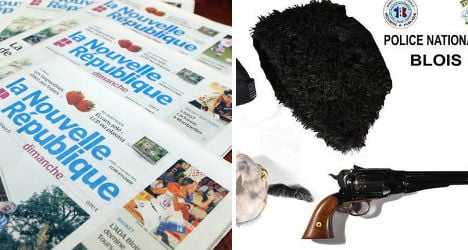 A former crime reporter at the Nouvelle Republique followed in the footsteps of the subjects of his articles. But he couldn't learn from their mistakes. Photo: AFP/ Police nationale

There aren’t many journalists out there getting rich off their work, especially not that underappreciated newsroom stalwart: the crime reporter. And for one crime beat veteran in the central French city of Blois things just spiralled after retirement.

The retired hack had gone through a nasty divorce, his son was racking up bills for school and his money problems kept growing. That’s when police say he turned to something he’d written about plenty of times, robberies, France Info radio reported.

He is believed to have hit five shops since September 2013, gathering about €9,000 in cash, up until last week.  His modus operendi was usually the same each time. He’d wait until closing time and then force the workers at gunpoint to turn over the day's takings or the contents of the safe.

But on Monday, after his sixth and final hold up, the cops nabbed him as he walked out of the store in his disguise. It turned out detectives had been watching the old reporter, whom they knew well from his days onthe crime beat, for weeks.

In his time as a reporter, the journalist who wasn’t named, had probably written about the careless criminals who left their wallets at crime scenes or crash into police cars after robbing banks. Butthat didn't stop him making his own mistakes.

After he’d been identified as a suspect police took a look at the retired reporter's bank records and were struck by the timing and amount of the deposits. It turned out he’d been putting the loot into his personal account shortly after the crimes.

The tale should serve as warning to the ex-reporter’s replacement at the Nouvelle Republique, who was forced to write about the arrest. Not surprisingly there is no mention that the suspect used to ply his trade at the paper.

The TGV train heading from the eastern city of Colmar to Paris had a delay of 90 minutes as a result of being stopped for security forces to intervene, the spokesman said.

“The situation is finished and under control. The individual has been arrested,” a spokesman for SNCF told AFP.

A police source said that the man was initially detained by a policeman who was travelling on the train as an ordinary passenger.

The nature of the attack that the man had threatened to commit was not immediately clear.