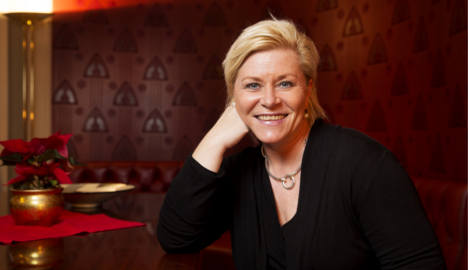 Progress Party leader Siv Jensen - Håkon Mosvsvold Larsen / Scanpix NTB
In a poll made last week just 11.7 percent of respondents said they would vote for the Progress Party, down from 16.3 percent of votes the party won in the election.
Had the party won that many votes in the election, it would have had 19 rather than 29 MPs.
Harald Tom Nesvik, the party's parliamentary leader downplayed the significance of the polls.
"The ruling party tends to prosper right after elections, but their smaller partners normally bounce back," he said. "It's a long time until the next election."
Progress has moved to moderate its populist stance since entering government, with two of its most vociferous anti-immigration figures resigning from positions in the party.
Per Sandberg, formerly the party's deputy leader, and Christian Tybring-Gjedde, formerly the leader of the party in Oslo, have both stepped down since the election.
Nesvik predicted that the party's core voters would eventually see that, despite the compromises it has had to make, it has made significant achievements in government.
"We have had a major impact in terms of tightening asylum and immigration policy, we have been striving to get rid of inheritance tax, and we have increased investment in transport policy," he said. "These things are going to provide more support in future measurements."
The level of support is the lowest the party has seen since pollster Norstat began its months polls of party support in 2006.