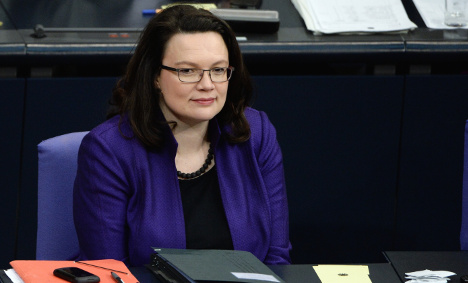 Labour Minister Andrea Nahles Photo: DPA
Under a key campaign pledge of the Social Democrats (SPD) in Chancellor Angela Merkel's new "grand coalition", workers who have paid into the social security system for 45 years will be able to retire at 63 on full benefits, down from 65.
Economists say this weakens a goal of slowly raising the retirement age to 67 in the fast-ageing country, whose government has preached welfare reform and fiscal belt-tightening to embattled eurozone members.
The reforms have caused tension between Merkel's conservatives and the SPD who hold the Labour Ministry under Andrea Nahles. Conservative politicians have spoken out against the plan to reduce the retirement age to 63 for those who have worked for 45 years.
And under another costly measure in the draft plan – this one a campaign promise of Merkel's conservatives – pensions will also go up for mothers whose children were born before 1992. It will affect around 10 million mothers.
The pension reforms will initially cost an extra €4.4 billion a year rising to an additional €11 billion a year by 2030.
Leftist opposition lawmakers charged that the elderly would cash in at the expense of younger generations, whose pension payments and, from 2019, higher payroll taxes would pay for the extra entitlements.
Greens Party parliamentary leader Katrin Goering-Eckardt said pension coffers were being plundered and asked "which straw … do they plan to spin into gold to pay for all of this," referencing a German fairytale.
The Merkel cabinet plans on January 29th to discuss the draft bill presented by Labour Minister Nahles which is set to take effect on July 1st.
The two big governing partners together have an overwhelming majority in parliament.
READ MORE: Poor pensions frighten half of Germans