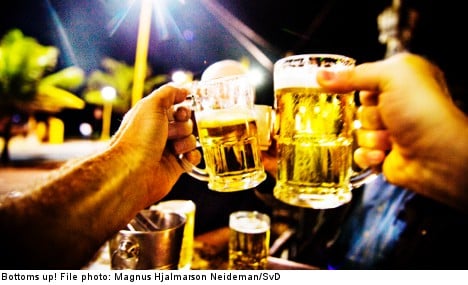 A petrol station assistant in Karlskrona, southern Sweden, notified police after a 63-year-old Asian man was acting as if under the influence of alcohol while filling his car.
Officers traced the man to his home, where they measured the man's blood-alcohol level and found it to be 1.64 promille, over eight times over Sweden's legal limit of 0.2 promille.
However, the Asian man had two witnesses who could testify that he had downed a 18 centilitres of whiskey since arriving home. Before he drove, he claimed to have only consumed a small glass of beer.
The 63-year-old denied the charges, and the court took into account the fact that it could not be proven that he had actually driven while under the influence of alcohol.
In dropping the case, the court also noted that the man was Asian and it should be "considered general knowledge that people from different ethnic groups react differently to alcohol intake", reported the Dagens Juridik newspaper.
It's not the first time a drinker has beat a Swedish court under unusual circumstances. In October, a Gothenburg man got off drink driving charges after it was found that he was asleep at the time. In February, a 61-year-old Ystad man was cleared after the court noted he had a particularly high alcohol tolerance.

Buying alcohol in Sweden: What you need to know