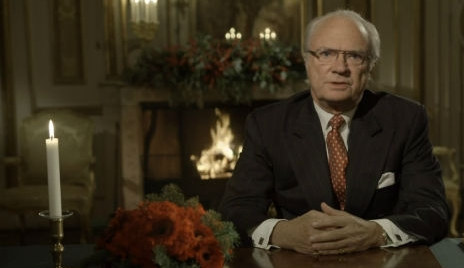 Carl XVI Gustag gives his New Year's Speech last week. Screengrab: SVT
National Day, on May 17th, is arguably the most important day of the year for Norwegians, with marches and flag-waving taking place across the nation to commemorate the signing of country's first constitution.
But while Denmark's Queen Margrethe has announced that she will be attending the bicentenary event in Eidsvoll, where the constitution was signed, Sweden's King is not attending.
"Since this is such an important national event and means a good deal to the Norwegians, I think that the Swedish King and Queen ought to be present," Karsten Alnæs, a prominent Norwegian historian, told The Local. "It would make the occasion even more solemn and it would contribute to the good relations between our two countries."
Sten Hedman, a veteran Swedish court reporter, rued the King's decision, calling it "ahistorical".
"We are a sister nation so we should also celebrate the fact that Norway got a constitution," he told NRK. "This is the anniversary, and it will be over 100 years until the next time we get this opportunity."
He speculated that if Norway's King Harald V issued a personal invitation, King Carl Gustav would be more likely to attend.
Norway's constitution was signed in May 1814 after Norway, rather than accept the deal between Britain, Sweden and Denmark  to transfer rule from Denmark to Sweden at the Treaty of Kiel, instead declared independence.
Sweden's then Crown Prince Carl Johan marched on Norway, but after failing to secure an outright victory, agreed to accept the constitution, in return for which he was crowned King of Norway.

“I’m happy that the vaccines we have in stock can be put to use even if the AstraZeneca vaccine has been paused in Norway,” Health Minister Bent Høie said in a statement.

The 216,000 doses, which are currently stored in Norwegian fridges, have to be used before their expiry dates in June and July.

Sweden will receive 200,000 shots and Iceland 16,000 under the expectation they will return the favour at some point.

“If we do resume the use of the AstraZeneca vaccine, we will get the doses back as soon as we ask,” Høie said.

Like neighbouring Denmark, Norway suspended the use of the AstraZeneca jab on March 11 in order to examine rare but potentially severe side effects, including blood clots.

Among the 134,000 AstraZeneca shots administered in Norway before the suspension, five cases of severe thrombosis, including three fatal ones, had been registered among relatively young people in otherwise good health. One other person died of a brain haemorrhage.

On April 15, Norway’s government ignored a recommendation from the Institute of Public Health to drop the AstraZeneca jab for good, saying it wanted more time to decide.

The government has therefore set up a committee of Norwegian and international experts tasked with studying all of the risks linked to the AstraZeneca and Johnson & Johnson vaccines, which is also suspected of causing blood clots.

Both are both based on adenovirus vector technology. Denmark is the only European country to have dropped the AstraZeneca
vaccine from its vaccination campaign, and said on Tuesday it would “lend” 55,000 doses to the neighbouring German state of Schleswig-Holstein.