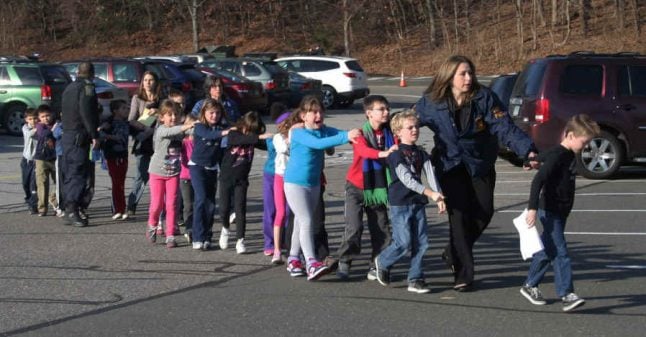 A picture from the Sandy Hook school shooting. File photo: AP
The Swedish company, which mainly sells equipment such as trampolines for school gymnastics classes and  used the picture to market its product "The Life Line" (Livlinan), used to keep young children in line when out walking.
The harrowing picture, which shows a teacher leading clearly terrified children to safety after the Sandy Hook Elementary School shooting that left 26 dead, was accompanied by the text "It's easier to keep the children together with 'The Life Line'. Supple and soft to hold. Durable and affordable."
The company said the mistake was due to time pressure.
"I had half an hour to put together an advert," a company spokeswoman told The Local on Wednesday. She had simply searched for "children in line" on Google, which pulled up a selection of images and cartoons.
"This one had nature that looked Swedish and the clothes were quite Swedish," she said about placing the ad in the small pre-school magazine, which has a circulation of some 5,000 readers.
"Everything was fine until one person told me what it depicted. I was so distraught I wanted to call in sick or resign altogether," the spokeswoman said of the crushing moment she realized what image she had poached from the internet.
The advert was published in Förskoletidningen, a magazine aimed at staff in the daycare industry in Sweden. An individual soon reported the ad to the Swedish Advertising Ombudsman (Reklamombudsmannen), an advertising and marketing industry watchdog.
A review board of nine experts unanimously found the advert to be offensive.
"The person who reported us must have had a special relationship to the shooting to react that way," the gym-equipment company's spokeswoman told The Local. "We showed that picture to 30 or 40 people and no one knew what it was, but of course everyone was horrified when we told them."
The RO Jury (Reklamombudsmannens opinionsnämnd  – Ron) also found that the advert was in breach of international trade regulations for advertising and marketing.
"The complainant wrote that the picture used in the advert was distasteful and offensive, as the picture was taken during a school massacre in the US in 2012," the summary of the report stated. "The image shows crying and terrified children."
The Swedish company responded officially to the complaint that it had not meant to offend anyone with the choice of picture.
The ombudsman ruled that the advert was in breach of several paragraphs in the International Chamber of Commerce's Advertising and Marketing Communication Practice guidelines. Firstly, that advertising be created with a sense of social responsibility, in particular when in regards to children and youth.
"The RO Jury concludes that the picture was taken at a school massacre in the US in 2012 and was widely published in the media," the ruling stated. "The picture can be assumed to make many consumers feel very ill at ease."