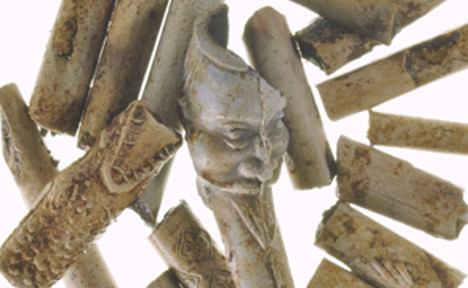 The Jonah tobacco pipe was found during excavation on Södermalm. Photo: Arkeologikonsult

The rare opportunity to dig in the middle the bustling district of the Swedish captial has archaeologists giddy after unearthing a wealthy family's 16th century kitchen, with curiosities to spare.

"It’s thrilling," project leader Kenneth Svensson told The Local. "We know so little about Södermalm, historically and archaeologically. Everything we find is something new."

At the end of October the team discovered a basement kitchen apparently belonging to a rich family at the end of the 16th century. The walls are still mostly intact, made of plastered brick surrounding a sandstone floor.

"It's an extraordinary feeling to stand there," Svensson said. "It's rare that we find three-dimensional sites with standing walls. You can almost imagine what it was like."

IN PICTURES: Take a peek at Södermalm's 16th century kitchen

The kitchen also features two large tile stoves, one of which had been walled up in a 17th-century renovation and was inexplicably full of eggshells. Both hen eggs and goose eggs had been placed into the stove, and the team can only guess why.

"It was totally unexpected. We don’t know why they ended up in the oven," Svensson said. "They could have been cooking, but it looks like some kind of ritual. Back in those days there were many different folk rituals when people built houses and tore them down, things like putting coins under the floors to bring luck."

Sure enough, coins were also found beneath the floors, dating back to 1590, the reign of Queen Christina. The house stood there for about 45 years and was torn down in 1635, when Stockholm expanded and created road plans for the island of Södermalm.

Archaeologists believe the kitchen may have belonged to the house on the bottom left.

Before the new city plan of the 1630s, Södermalm (called Åsön at the time) was on the outskirts of Stockholm and was mostly inhabited by craftsmen and merchants. Svensson suspects that life across the street was another world. The archaeologists have discovered mounds of waste and garbage in much simpler house frames nearby.

"There was a different kind of social strata," Svensson said. "We didn’t expect to find such a wealthy family living here."

Researchers suspect the family was heavily compensated for the land when the house was torn down in redevelopment. They didn't even pack all their trinkets. Coins, perfume bottles, and intricate pipes were found on the site.

"It's spectacular," Svenson said of the most ornate tobacco pipe. The pipe is carved and depicts Jonah of legend being eaten by a crocodile – which then spit him back out due to his foul tobacco flavour.

"At that time it was only wealthy people and the upper middle class that smoked pipes," Svensson said. "They are usually simple and undecorated. So this one was something special."

The team will keep digging at Södermalmstorg for about another two weeks, wrapping up at the site on December 6th. Svensson believes they will reach medieval artefacts before then.

"The most exciting thing would be to find medieval remains here, and I think we will. Right now we’re in the 16th century and we still have a half metre left to dig."

Slussen's redevelopment is expected to go on for about seven years, during which the team of archaeologists will continue digging at various sites before they are reconstructed.