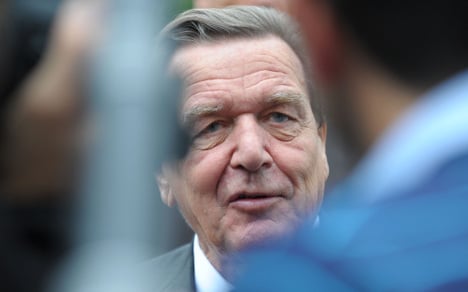 Britain would do its utmost to block any attempts to bring the 28-member European union closer together, as that would imply handing over more powers to Brussels, said the former chancellor on Thursday

"We need… to press ahead with Europe's political unity, towards a kind of European federation," he urged.

Among other moves, the 28-member European Union needed to appoint a single EU finance minister who would have the power to discipline states which failed to obey the rules, such as during the recent debt crisis.

Schröder warned however: "The problem has a name, and that's Britain. As long as the British block these moves, nothing will happen."

"The failure to implement steps that were decided four years ago by the G-20 in Pittsburgh to restrain the financial sector, has much to do with the City of London," he went on.

"Those who are willing to have more integration should not be bound by those who aren't."

Schröder also called for Turkey to be admitted to the EU and for a closer partnership with Russia, if Europe wants to compete economically with the US and a rising China.

"Europe needs Russia's resources, and our economies needs its market," he said.