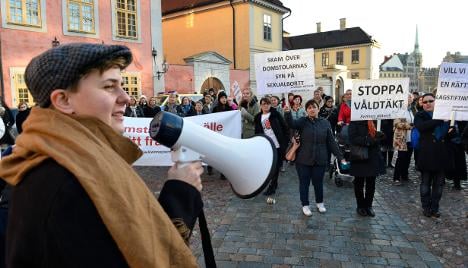 “We are there both to express our concern about the development of the many acquittal rulings in courts around the country and show our support for the girl,” the organizers said in a statement.

The case concerns a 17-year-old girl who fled abuse and the threat of being married off against her will. Two years ago the teenager was placed in the care of a foster home in central Sweden and had begun to rebuild her life.

In her testimony to the district court, the girl however told how the father in the family changed in the early months of 2012 and how she was forced to perform oral sex on him on two occasions. In March 2012 she reported the man for rape.

Police found traces of the man’s sperm both in her vagina and on the mat in her bedroom, where she claims the rape took place.

The man explained to the court that he had been “erection training” in the bathroom and had left a piece of paper with his sperm on it, claiming that this may explain how his sperm was found in the girl’s vagina.

The district court ruled that the man’s explanation was feasible and he was acquitted.

According to a report in the Aftonbladet daily, the girl furthermore claimed in court that the man had offered her 20,000 kronor ($3,000) if she declined to report the alleged rape.

“At first I dared not report it, it had been a really tough time. But I had a hope that you should not just be able to do this without being punished for it,” the girl, named only as Sandra, told the newspaper.

The case renews focus on Sweden’s sex-crimes legislation which has been the subject of debate since six teens were acquitted in September of raping and sexually assaulting a 15-year-girl at a party in Tensta, northern Stockholm.

While the boys were initially convicted of aggravated rape, they were cleared as the Svea Court of Appeals ruled that according to a rewritten sex-crimes law, the victim could not have been deemed to be in an "incapacitated state" and therefore was not helpless at the time of the incident.

The organizers of Monday’s demonstration have called on Sweden’s Justice Minister Beatrice Ask to convene a “breakdown meeting” on the issue.

“The women's movement is waiting and is persistent. It is high time for the minister to act now to show that sex crimes are a priority!”