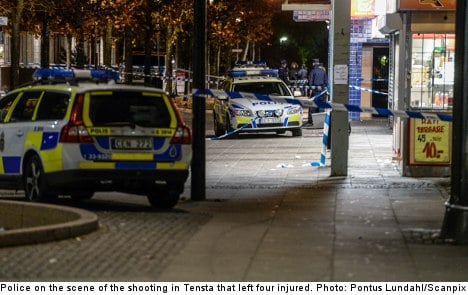 “One of them is in critical condition, while the others have less serious injuries,” police spokesman Lars Byström told the TT news agency.

The gunfire erupted near a sausage stand in central Tensta, with witnesses reporting five to six shots fired.

Police received a call about the shooting at 9.13pm, however it took more than 20 minutes for ambulances to arrive on the scene. As a result, three of the victims were transported to hospital by car.

“Staff at the grill were screaming for people to come with their own cars and drive those who were injured to hospital because the ambulances didn’t come,” a witness told Aftonbladet.

“There was blood everywhere.”

There were several witnesses to the shooting and police have launched a preliminary investigation into attempted murder.

Witnesses reported that two shooters were involved in the incident, and that both fled the scene on a scooter in the direction of the Spånga IP athletic fields.

As of 6am Monday morning, no arrests had been made.

The shooting is thought to be related to a settling of scores among criminal gangs who have been feuding in the area.

“There have been a few shootings previously and that’s something we’re going to look into – whether there is some connection,” Byström told Aftonbladet.

PARTNER CONTENT
Still struggling with Swedish? Here’s how to accelerate your learning
Url copied to clipboard!