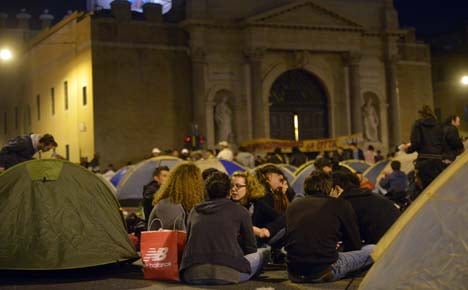 People talk next to their tents as they set up a camp near the Transport minister at Porta Pia after the anti-austerity protest : AFP Photo / Filippo Monteforte

A delegation of protesters was set to meet Transport and Infrastructure Minister Maurizio Lupi on Tuesday to discuss their demands.

"We will keep the tents until we meet with Lupi on Tuesday, when we will have another demonstration to make our voice heard," said Luca Fagiano, a
representative of the protest organisers.

"Let's Take Back the City" read a banner at the camp, which is blocking a major throughway in the Italian capital. Another banner said: "Stop to evictions, clear-outs and repossessions".

"The camp is not a point of arrival but the beginning of the uprising," read a slogan on the website of protest organisers, the Civic Coordination for the Struggle for Housing.

Tens of thousands had marched through Rome in a mostly peaceful demonstration on Saturday to draw attention to the social cost of the economic crisis, and some later set up the tent camp.

There were some clashes between riot police and groups of protesters outside the finance ministry on Saturday and Interior Minister Angelino Alfano said 16 people had been detained and five French militants had been expelled from the country.

A painful two-year recession in Italy has pushed unemployment levels to record highs, shut down thousands of businesses and forced many young Italians to move abroad to look for work.

Many people are struggling to keep up with mortgage repayments and to afford rent, leading to a sharp increase in evictions and repossessions.