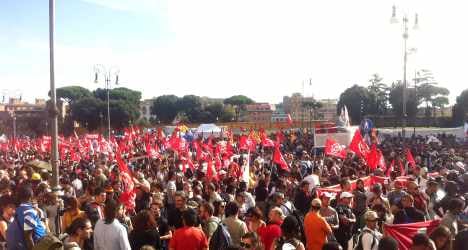 "We are laying siege to the city!" a group of students chanted as they marched through Rome, while others waved rainbow peace flags and held up banners from a variety of leftist movements.

"We are protesting a one-way austerity that is putting the country on its knees," said Piero Bernocchi from the Cobas trade union association.

IN PICTURES: Thousands rally against austerity in Rome

"And it hasn't achieved what it was meant to by bringing down debt," he said, adding: "Meanwhile politicians continue with their privileges".

Police have seized potential weapons including chains, helmets, clubs and a knife and have detained 14 people ahead of the protest.

Between 3,000 and 4,000 police officers have been deployed, media reports said, and organizers say they expect more than 20,000 people at the protest.

A few thousand demonstrators could be seen at the protest already, but more people were still arriving.

Listen to people playing drums at the protest:

listen to ‘Drums #19o’ on Audioboo

The demonstration brings together a variety of groups including migrant rights advocates, campaigners for affordable housing and protesters against a new high-speed rail link in the Alps.

Listen to refugees chanting for "respect" in Rome:

listen to ‘Rome refugees’ on Audioboo

Some of the protesters had camped out overnight on Piazza San Giovanni square following a trade union demonstration and transport strike on Friday.

They are planning another protest camp on Saturday night close to the infrastructure and transport ministry which they blame for failing to build affordable housing and wasting money on large-scale construction projects.

Many shops in that area of the Italian capital have remained shuttered for the protest in a bid to minimize potential damage to property.

Reports suggest demonstrators may be planning to occupy buildings, including hotels, in protest over a lack of accommodation for poor families who have been hit hard by the recession, the longest Italy has suffered since the post-war period.

Watch a video of the protesters in Rome:

Tens of thousands of protesters in Rome. #19o from Rosie Scammell on Vimeo.