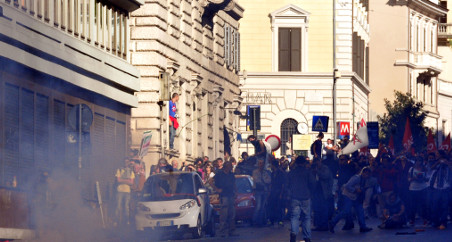 Rome is bracing itself for a weekend of protests. Photo: Alberto Pizzoli/AFP

The demonstration, initiated by trade unions, students, migrants, refugees and the homeless, marks the end of weeks of protests across the country.

Marino said on Thursday he was “positively worried” about how the protest might go off.

“We will have a permanent crisis unit coordinated by the mayor’s office in close contact with the Interior Ministry to follow what happens in our city, hoping that the protests will be democratic and will avoid any form of violence. I truly hope so.”

The demonstration begins with a general strike on Friday and will affect public transport, public administration, health services and air, rail, sea and freight transport.

The strike is “against the drastic recipes of the IMF, the ECB and the European Union, which in the name of monetary stability impose ruinous social policies on our country.”

It is also calling for a “national employment plan based on necessary public works; for the defence of schools, universities, research and public security; for the regularization of immigrants and abolition of the Bossi Fini law (a controversial 2009 immigration law that made irregular immigration a crime punishable by fines, detention and mandatory repatriation) and for democracy in the workplace.”

Friday’s march will start at Piazza della Repubblica and finish at Piazza San Giovanni, where many protesters will spend the night.

The demonstration will be stepped up on Saturday, with the focus being on a government which protesters say “favours the wealthy”. They will “lay siege to austerity and precariousness”. The event starts at 2pm at Piazza San Giovanni and will also include activists from the No TAV campaign, which is against the high-speed rail network planned in the northern Susa Valley. Activists believe the project, if successful, will have serious consequences on the wellbeing of the local population and the environment.