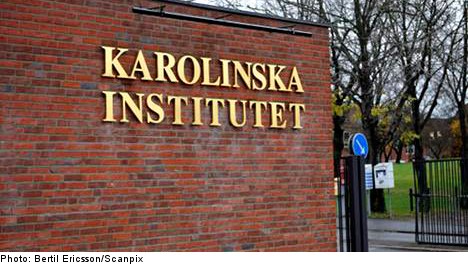 The improvement also left Karolinska as the seventh-highest ranked university in Europe.

Stockholm University came in as the second-highest ranked Swedish university at 103rd place, nearly cracking the top 100 globally for the first time.

Uppsala University, the Royal Institute of Technology (KTH), and Lund University all also landed among the top 200 universities on the Times Higher Education list.

While Stockholm, KTH, and Karolinska all saw their rankings improve from last year, Lund saw its position among the world’s best universities tumble from 82nd place last year to 123rd in the 2013-2014 ranking.

However, Sweden and its Scandinavian neighbours emerged as a bright spot in an otherwise sombre assessments of European universities’ global reputation.

“Sweden has five top 200 institutions, Denmark three, and Finland and Norway one. Scandinavia’s strong commitment to the public funding of universities has obviously served its countries well in global competition.”

The global top-ten was dominated by American and British universities, with the California Institute of Technology retaining the top spot, while Harvard shared second place with Oxford University in the UK.

Other Swedish universities included among the top 400 globally in the Times Higher Education ranking include the University of Gothenburg, the Swedish University of Agricultural Sciences, Chalmers University of Technology, Linköping University, and Umeå University.

The UN’s Human Development Index (HDI) ranks countries on how well they provide conditions for people to reach their potential, using parameters including life expectancy at birth, expected years of schooling and gross national income.

Norway is top of the 2020 HDI, a ranking not uncommon for the Nordic nation.

The report, which comes from the UN Development programme (UNDP), ranks countries in relation to progress on the UN’s global development targets. Like it was this year, Norway is regularly ranked the world’s top nation by the UN.

Despite this consistency, Norway can no longer call itself the ‘world’s best country’ based on the ranking, national broadcaster NRK writes.

A new addition to the ranking will include the costs to nature and the environment of gross national product. That will make CO2 admissions and individual carbon footprints part of the broader assessment of development.

According to the UNDP, emissions are a new and experimental lens through which to view development. But the inclusion of climate and the environment gives the index a different look.

When CO2 emissions and resource consumption are factored in, Norway finds itself in a much more moderate 16th place on the UN development ranking.

The adjusted list is yet to be published by the UN, but the Norwegian national broadcaster has been informed of the new positions, NRK states in the report.

Norway’s CO2 emissions of 8.3 tonnes per resident are among the 30 worst values of included countries, and it also fares poorly in a measurement of material resource use per resident, resulting in a lower overall position.

“Norway loses its top placing because of our high imprint on the planet. This is an import debate and it’s time we had it,” Bård Vegar Solhjell, director of the Norwegian Agency for Development Cooperation (Norad), told NRK.