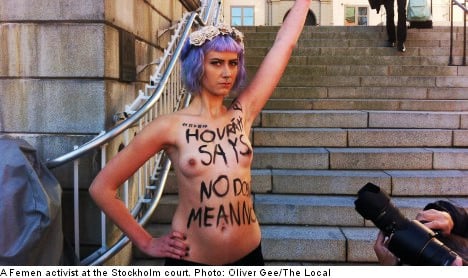 “One girl, six rapists. Still not asking for it. Stop legalizing rape,” the women yelled from the steps of the court.

The two protesters entered the Svea Court of Appeal (Svea hovrätt) in central Stockholm in Tuesday morning, marched into the lobby, and removed their tops.

On their chest, slogans reading “Hovrätt says no dosnt (sic) mean no” and “Stop legalizing rape.” Slogans on their back read “No means no”. In just minutes, the pair was escorted out of the building by security guards.

IN PICTURES: See the activists at the Stockholm court

The Femen members were protesting against a case that has rocked Sweden since March, when a 15-year-girl was sexually assaulted by five teens between the ages of 15 and 17 at a party in Tensta, northern Stockholm. Another teen was on hand to distribute condoms.

While the boys were initially convicted of aggravated rape, they were cleared last week as the Svea Court of Appeals ruled that according to a rewritten sex-crimes law, the victim could not have been deemed to be in an “incapacitated state” and therefore was not helpless at the time of the incident.

While the prosecutor claimed the girl was so scared that she was in a “helpless state”, the court decided that for a helpless state, the girl’s fear should have been as strong as unconsciousness, excessive drunkenness, or physical injuries.

On Tuesday, the two protesters explained that they were on hand to continue to push the message that that the ruling was wrong in an eventual effort to get the case taken to the Supreme Court (Högsta Domstolen).

“It’s fucking hilarious that they’re freeing rapists,” one of the protesters, Sara, told The Local.

Another protester, Moa, added that the Femen was backing the victim.

“Mostly I hope that this 15-year-old girl sees she is not alone and has practically all of Sweden behind her,” she told The Local.

“Most rape charges in Sweden just get dropped,” she added when asked why she protested. “It felt really good that I’ve done something.”