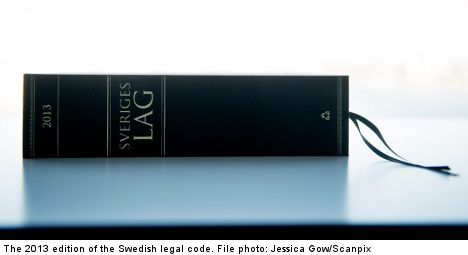 The boys admitted to having sexual intercourse with the girl at a party in Tensta, northern Stockholm, in March this year. Five were convicted of aggravated rape by the Solna District Court later that month. The sixth boy, who had given out condoms to the other boys, was convicted of attempted aggravated rape.

Sweden’s sex-crime legislation was amended on July 1st of this year, however, and included a rewrite of the term “incapacitated state” to “particularly vulnerable situation”, which in effect re-classifies certain types of sexual assault as rape.

But the Svea Court of Appeal (Svea hovrätt) ruled according to the old law as it was phrased prior to July 1st, 2013, arguing it was the law that applied at the time of the incident. In its ruling, the court found that the girl could not have been deemed to be in an “incapacitated state,” although it did recognize that she was in a vulnerable situation.

“She could have very well said no, but even if that was the case, that doesn’t automatically mean it’s rape,” judge Sven Jönsson told the Aftonbladet newspaper.

“The intercourse that took place can very well have happened against her stated will but if it didn’t take advantage of an incapacitated state it’s not rape.”

All six boys were subsequently cleared, in accordance to the old letter of the law. Yet Swedes were not late in passing judgment on the case, taking to social media to protest the controversial ruling.

While the prosecutor claimed the girl was so scared that she was in a “helpless state”, the court decided that for a helpless state, the girl’s fear should have been as strong as unconsciousness, excessive drunkenness, or physical injuries.

“I said no,” the victim told the Aftonbladet newspaper over the weekend, saying she no longer went out but only spent time with her closest friends. “Do they mean it’s my fault?”

The court added that the girl was not exposed to violence or the threat of violence, and that she herself admitted that she could have left the room and the apartment, but chose not to – thereby ruling out the idea that she was “helpless”.

“I’d like to ask the judge, if you were a girl and there were six to seven guys against you, would you dare resist and try to hit them?” the victim told Aftonbladet. “Or would you do what I did: Say no, then close your eyes and wait until it was over?”

The new ruling has prompted retired law professor Madeleine Leijonhufvud to speak out and call for the introduction of a specific law which says that consent must be given before sex.